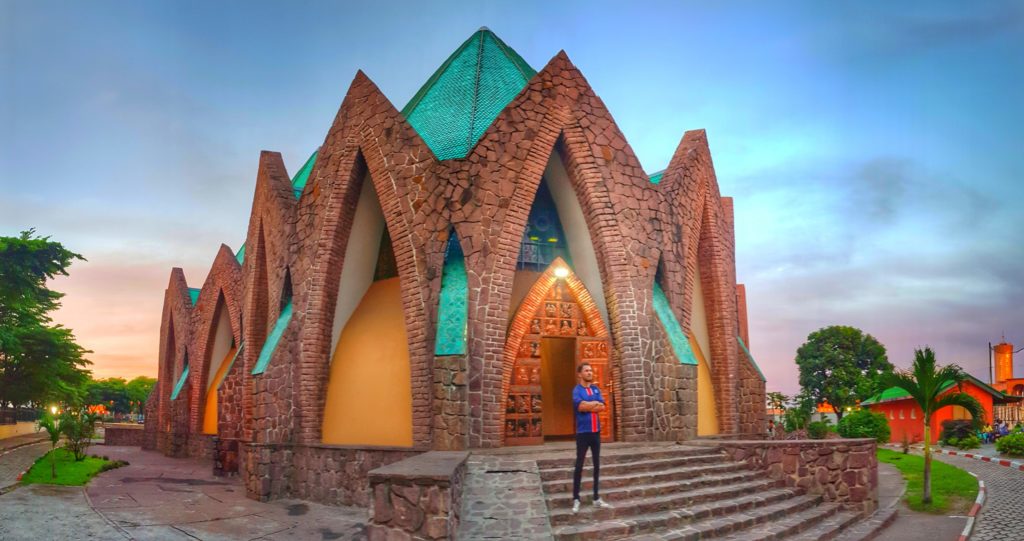 Ahhh “Brazza la Verte”, as it was called traditionally by the French (literally, Brazza the Green). After Experiencing its big brother the Democratic Republic of Congo last week, I was happy to see this new country that was acclaimed by the French as hosting their most important city in Central Africa, separated only by the Congo river to Kinshasa which was held by the Belgians. From the corniche of Brazzaville, we can clearly see the buildings of Kinshasa with its 9 million inhabitants, making them the two closest capitals in the world. As much as there are similarities between the two countries like having basically the same people, it does feel quite different on the ground. 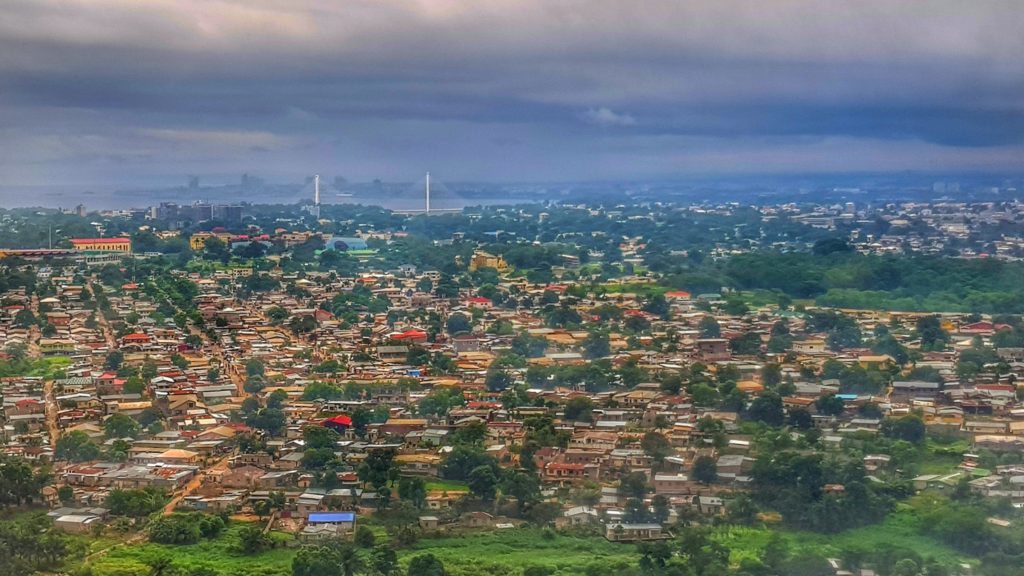 View of Brazzaville from the Sky

First, the Republic of Congo is quite definitely the most French-speaking nation I have encountered in sub-Saharan Africa, many people choosing to speak French even over their native languages. This made it great for me since I could communicate much easier with the people. Secondly, Brazzaville feels like a much wealthier version of the DRC, having been blessed with offshore oil fields that have converted its economy to one of those typical African inflated Petro-economies. As such, prices are much similar to European standards than African ones. The city also feels much more developed and it can be felt walking around the center of the city with modern malls, clean streets and also what I believe is the most beautiful basilica in Africa, the Basilique St-Anne du Congo (see picture above).

For my stay in Brazzaville, I had communicated with my friend Francel who had generously invited me to stay with him at his family’s place in a typical Congolese house, where generations live together in harmony in a great African family. Francel actually holds a tourism company, which can accommodate tours all over the country, from river tours to Gorilla Treks. I hadn’t much time to get out of Brazzaville on this trip but I wouldn’t hesitate to communicate with him for my future expeditions as I highly trust him. His contact can be found here. I was touched by the hospitality of his family which every member made sure I would feel comfortable and at home with them, literally adopting me as one of them. And as lucky as I am in my travels, I arrived on a “wedding weekend”. Francel’s sister was getting married and formally invited me to participate in the celebrations. These ceremonies are the most exciting for me since it offers the most culture in one can experience in a country. And I was rewarded with one of the most exciting weddings I have ever seen, even over the 2 weddings I had in Afghanistan earlier this year, the 2 weddings in Iran, in Moldova, Vietnam, etc… 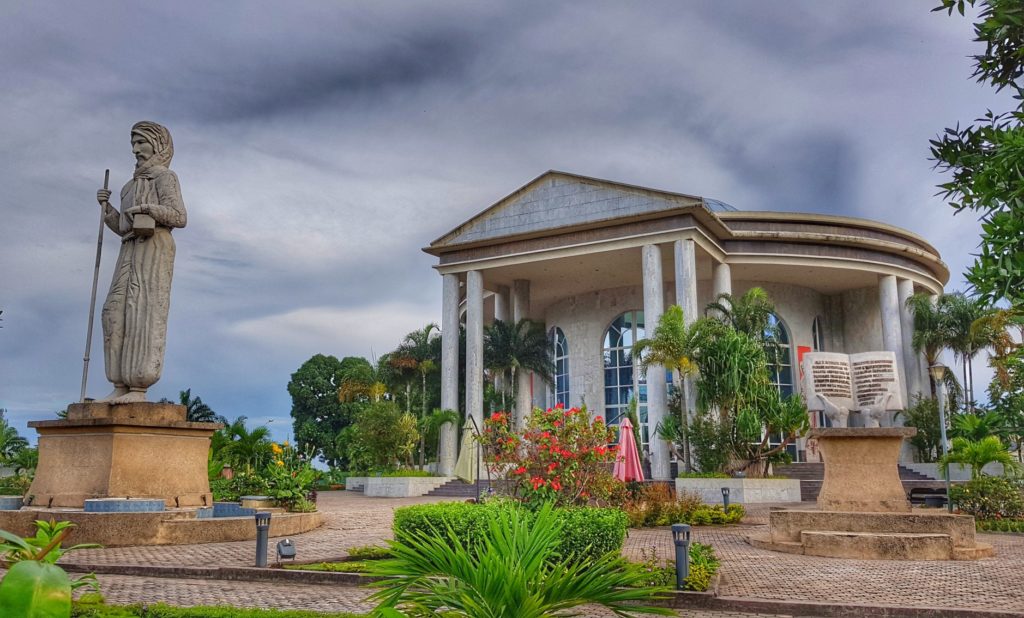 There are in fact 2 types of weddings in the Congo. The traditional one, and the more Modern Wedding which is closer to what westerners are used to, in the presence of the mayor, in a church, rings, etc… I was lucky enough to experience the Traditional Congolese Wedding, which consists of reenacting of the encounter of two families with over 100 members, facing each other and negotiating on how much the groom’s Family is willing to pay to gain the Bride’s hand. Both families assist at the exchanges between the two chiefs of the family, exchanging dozen of boxes of Beer, wine boxes, cheques, hard cash, shovels, matchboxes, Bags of Salt, a Goat, chickens, high heels… That was the price that the other family had to pay Francel’s Family, over negotiations that last over 3 hours between the 2 chiefs of the family speaking over microphones. The whole process was definitely more of a representation of how it was done traditionally, like a theatrical satire, than a serious bargaining, with both families joking and laughing at the scene. 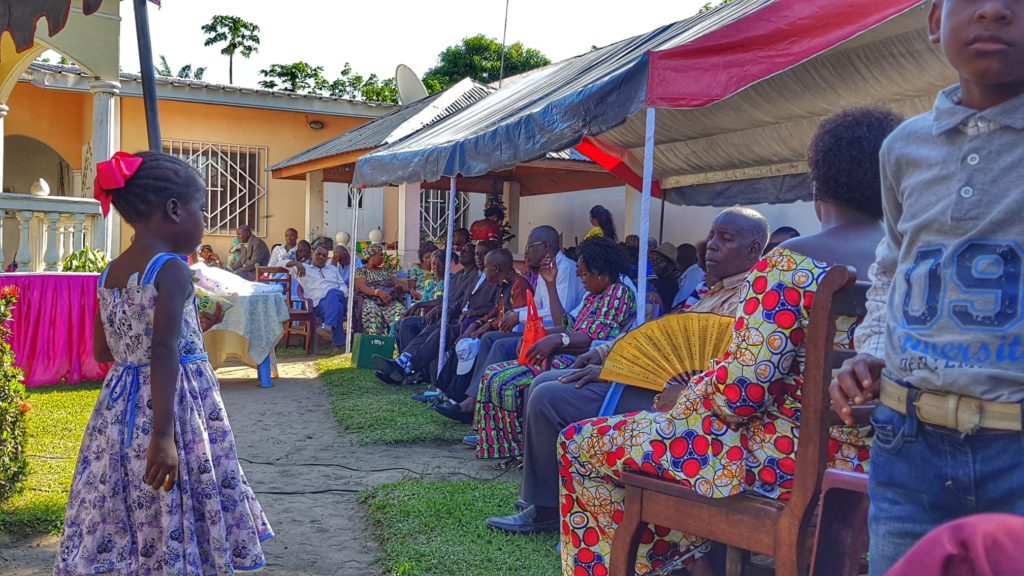 After Francel’s Family accepted the exchange, the ceremony continued with a feast that Francel’s family had prepared for the 100 plus guests present at the event. The Diner was traditional Congolese food, consisting of fresh fish, salted dried fish, beef, beans, manioc paste and also a special meal of mandioc leaves that were previously mashed in the traditional African way and which I participated in the preparation at Francel’s house where the meal was prepared previously prepared by the families women, which work none stop all night cooking tons of food. I was even photographed while mashing the Mandioc leaves 🙂 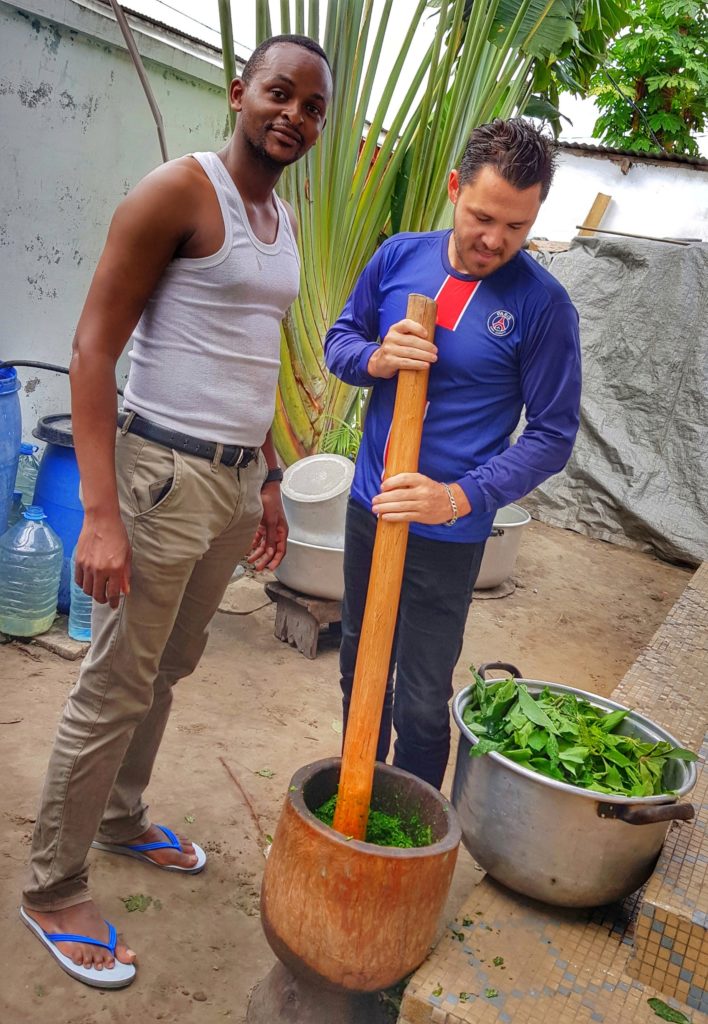 Overall, I was overwhelmed by my experience in the Congo, special thanks to all the members of Francel’s family who welcomed me as part of their own. Because of this, I was pleased to witness a typical Grand African Family where their people are not allowed to call cousins “cousins”, but rather “Brothers”. Uncles and Aunts are not allowed to be called “uncles” and “aunts”, but rather “papa” and “mama”. This whole system makes for massive families where each member has several fathers, mothers, brothers, sisters, and each member of the family participates actively financially and personally to each other, a demonstration of solidarity that is unique on this planet and where other nations should definitely base themselves on. I will miss my adoptive African family, and will definitely come back to see them in future when I come back to the Republic of the Congo! 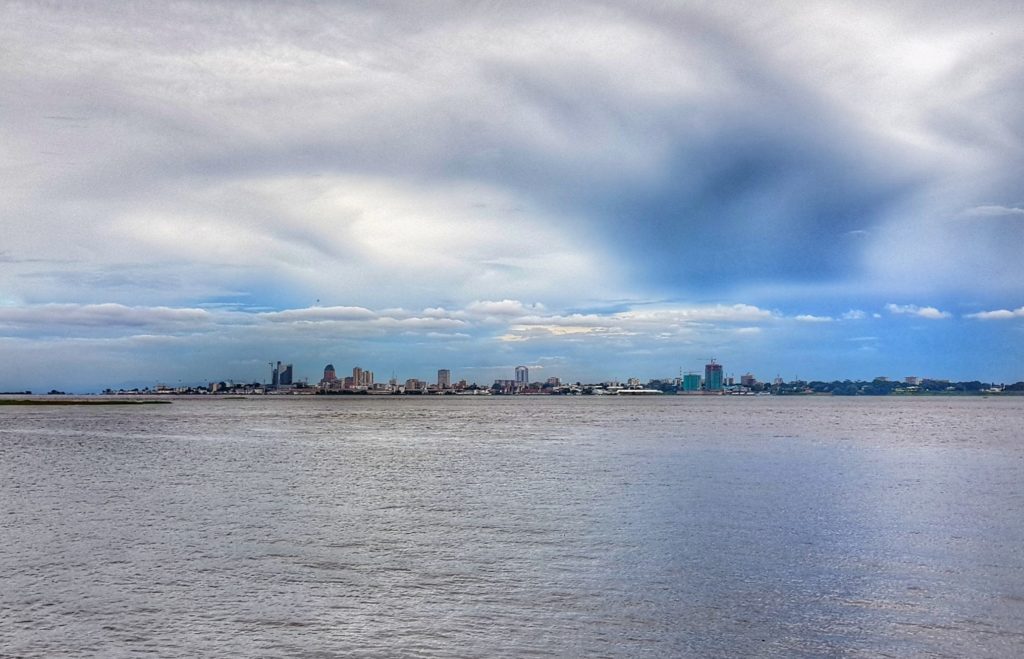 View of Kinshasa in the DRC, from Brazzaville 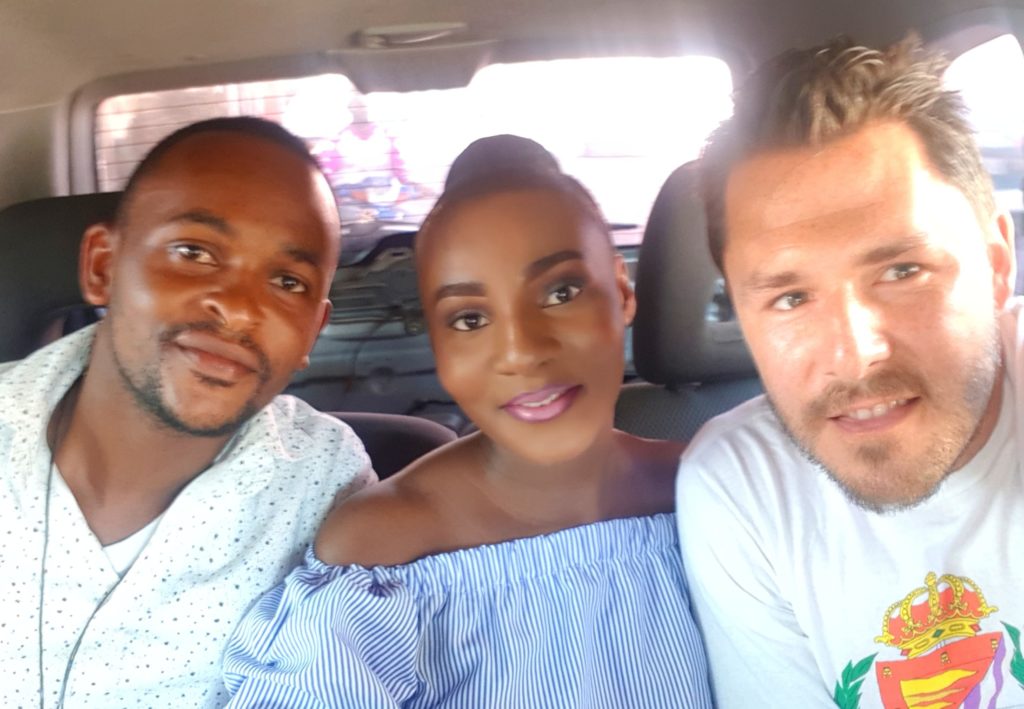 With Francel and Jeanine heading to the Wedding 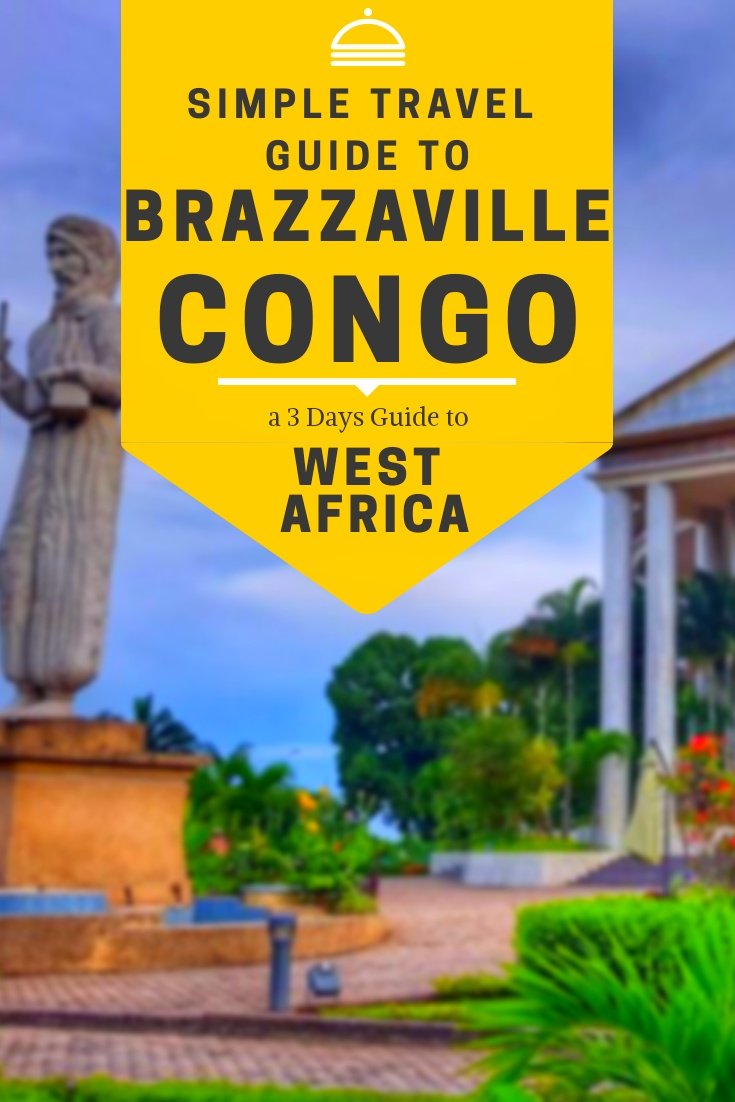 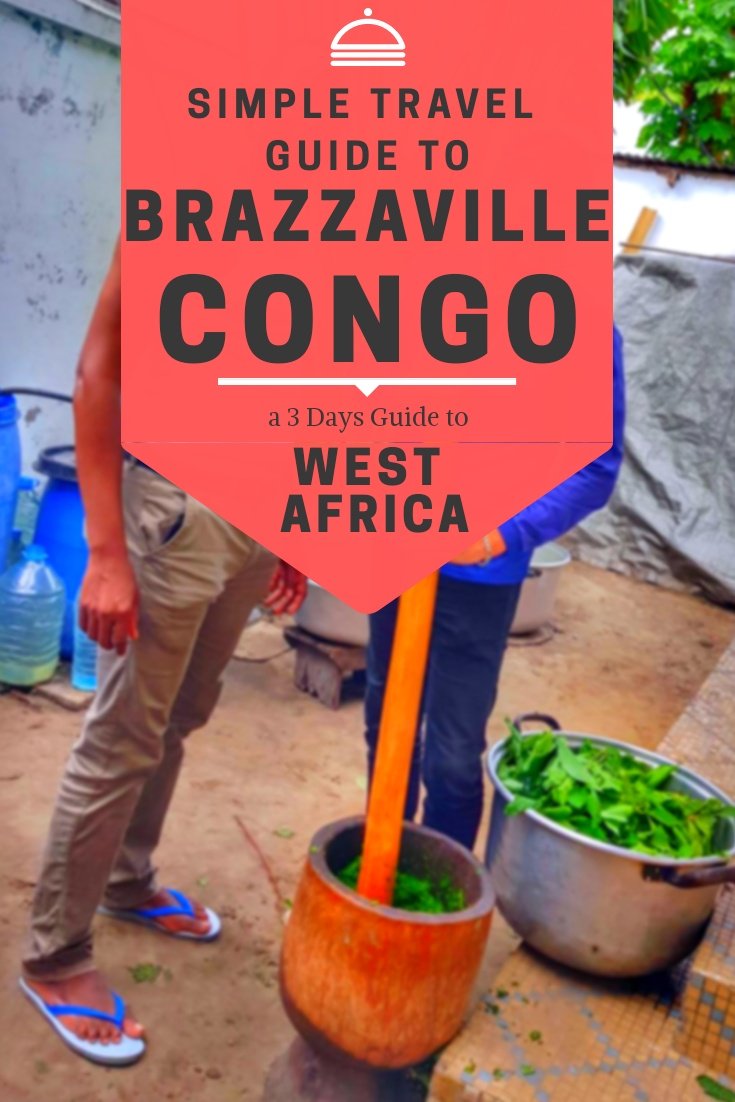 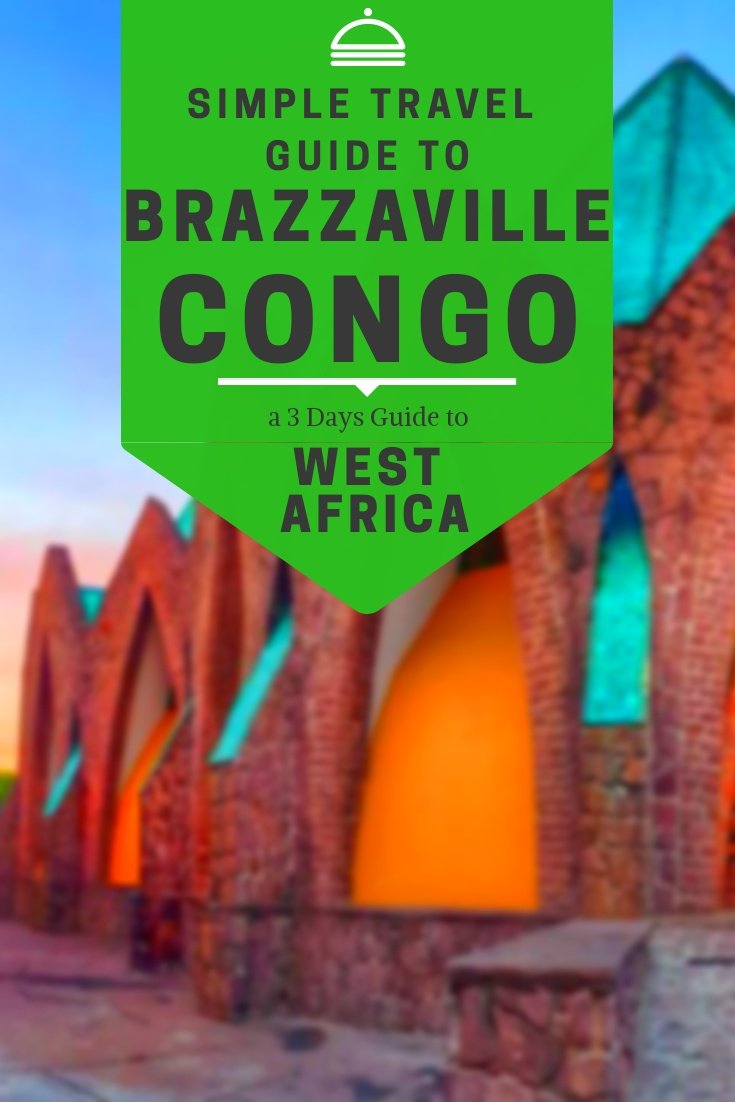