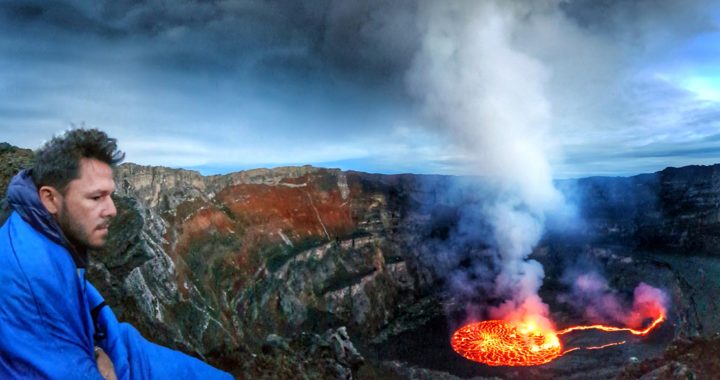 Not even two weeks since I climbed the world’s biggest crater, the Khartala in the Comoros Islands, it was now time to climb the world’s most dangerous volcano: The Nyiragongo in the Democratic Republic of Congo. My Legs had barely recovered from the pain of climbing the 2300 meters of the Khartala, that I now had to climb to another Summit, this time at about 3500 meters of altitude. But the reward for this second climb was unparalleled; a crater filled with a massive Lava Lake, one of the few visible in any volcano around the world and being the biggest lava lake in the world. 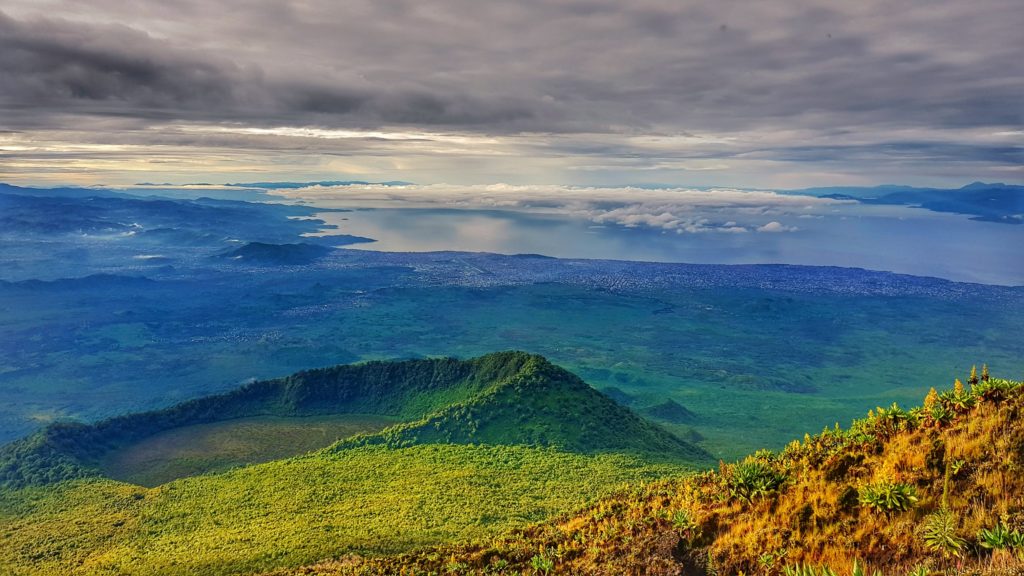 Back in 2002, the Nyiragongo erupted and rivers of lava started flowing directly towards the city of Goma where I was staying, a 1 million inhabitant city and was mostly all destroyed by the disastrous lava flow, which killed over 170 people. Now Goma has been rebuild on top of the lava, leaving a black carpet of lava everywhere and giving the impression of rich black granite stone covering the city. 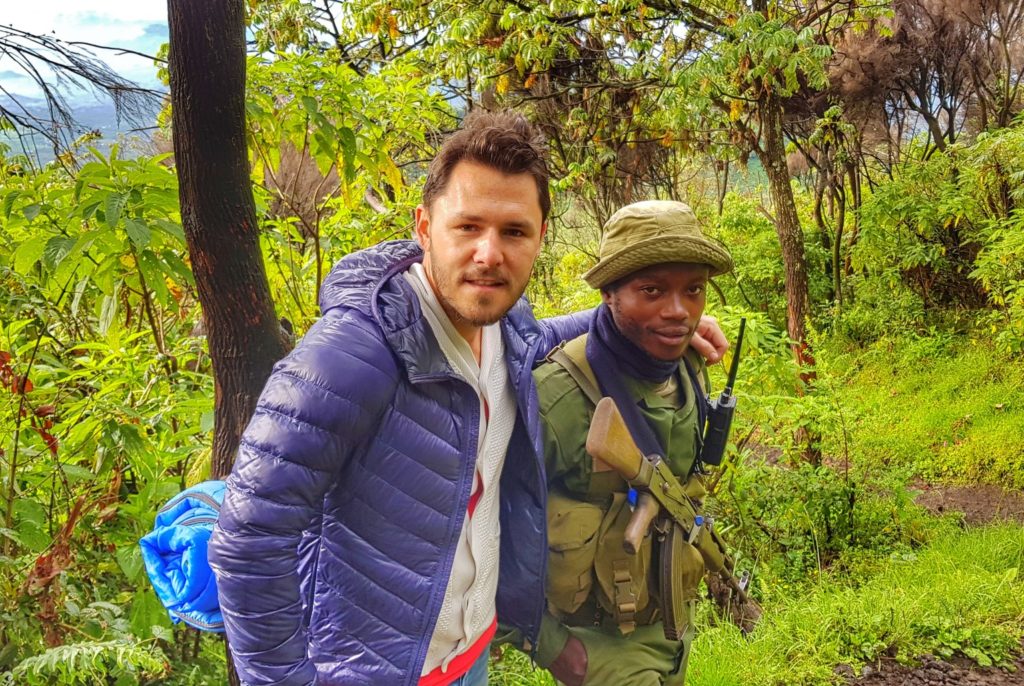 Ranger and Buddy guarding us against Rebels

I crossed the border of the DRC from Rwanda after traveling across the country on a bus from Kigali. The ride was very interesting, through the plains and volcanic mountains of Rwanda which provided so many shades of green I didn’t even know existed. From there I met my group of 5 hikers at the base camp of Kibati, along with a team of porters and Virunga park rangers that would guide us to the summit. The region of Eastern Congo is currently very volatile, with rebels living within the jungle of the Nyiragongo Volcano. Many Poachers also roam the area for rare animals, which makes it essential to be joined by armed guards with Ak-47s. Civil unrest is also very actual, not even 5 days before my climb I was worried things would escalate as 4 people were killed and 15 others were injured by rising tensions between the people of Goma against their government. I decided not to miss my chance and traveled anyway. 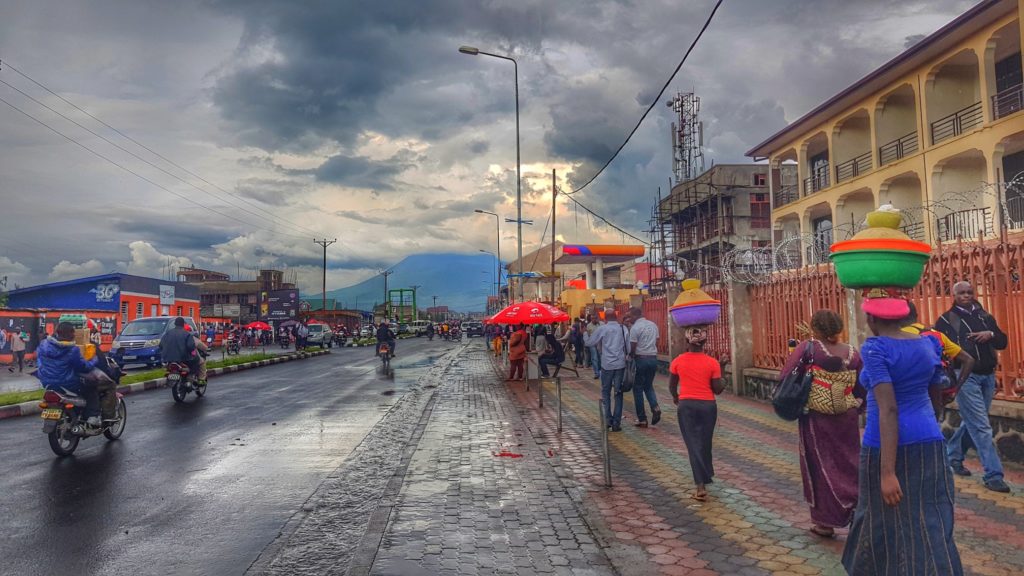 Goma, with the Nyiragongo in the horizon

We started in the thick Congolese jungle, famous for hosting a variety of primates such as the Chimpanzee and the Gorillas just a few kilometers away. After about 400 meters, we continued on lava rocks with the trail getting steeper, and the vegetation changing every couple meters of altitude with new tree varieties. The view was also breathtaking, getting higher towards the top with a view on Congo, Rwanda, Goma and also the beautiful Lake Kivu. The closer we would get to the summit, the harsher was the conditions, with rain pouring down on slippery lava stone, and the weather rapidly cooling down from 30 degrees in Goma, all the way to 4 degrees at the summit during the night! 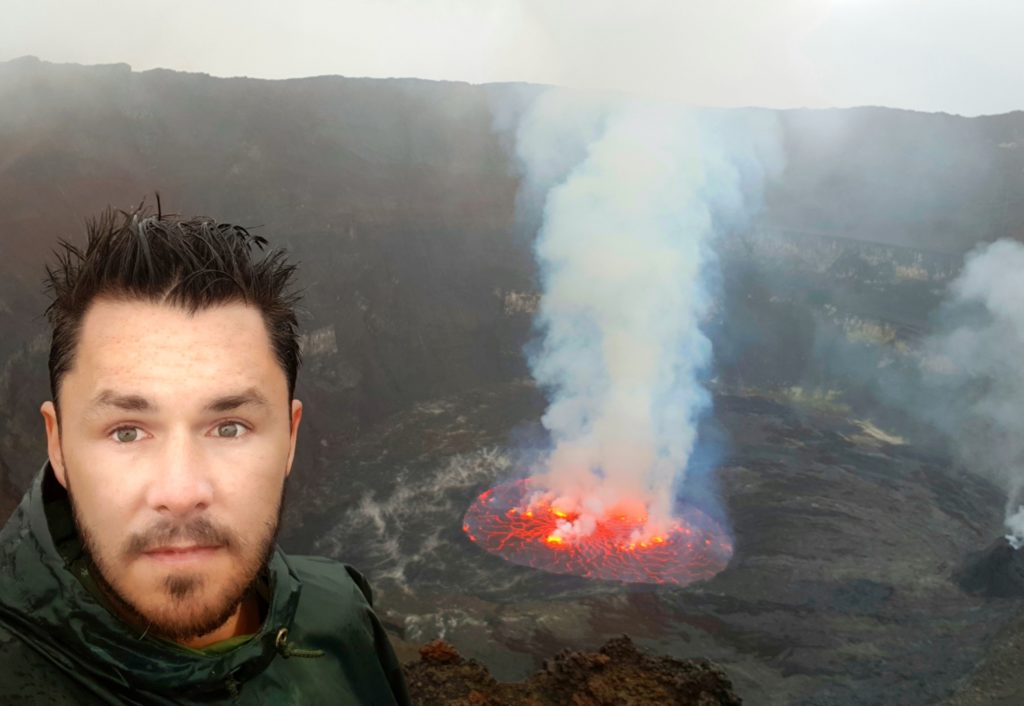 Arriving at the crater was a relief after all the hard work of climbing, and what a reward! The lava lake was even more impressive than I thought, like a massive 100 meters diameter red hot bowl of boiling soup! The rain was still poring at night so I decided to make it an early night and to wake up at 5 am hoping it would have cleared up.  Camping at about 4 degrees Celcius wasn’t easy… Rolled up in a little ball in my sleeping bag, I managed to rest a couple hours and at around 4 am, I was woken up by loud roars, I could even see the reflection of the red glow of the lava through the little window of my hut. I got to the edge of the crater, still wrapped up in my sleeping bag, to glance at a live eruption of a little cone that had formed on the right of the lava lake. We were told that we were lucky to see it as it only happens once every two weeks! The scene was magical, I stayed there with another Canadian friend from PEI, Kayla, for over an hour amazed at what was happening in front of our eyes.

Panoramic View of the Nyiragongo Crater

We then descended the volcano and finished the journey on the second day, going down for 4 hours. I then met up with a couchsurfer, John which is from Goma. Together we walked around the city talking about the current situation in the Congo, passing by countless amounts of U.N. Soldiers that are there protecting the areas. After noticing one soldier in his truck having a Guatemalan Flag on his shoulder, I couldn’t resist exchanging a little conversation with him, greeting him with a loud “heeey amigo como estas! viva Guatemala!!”. 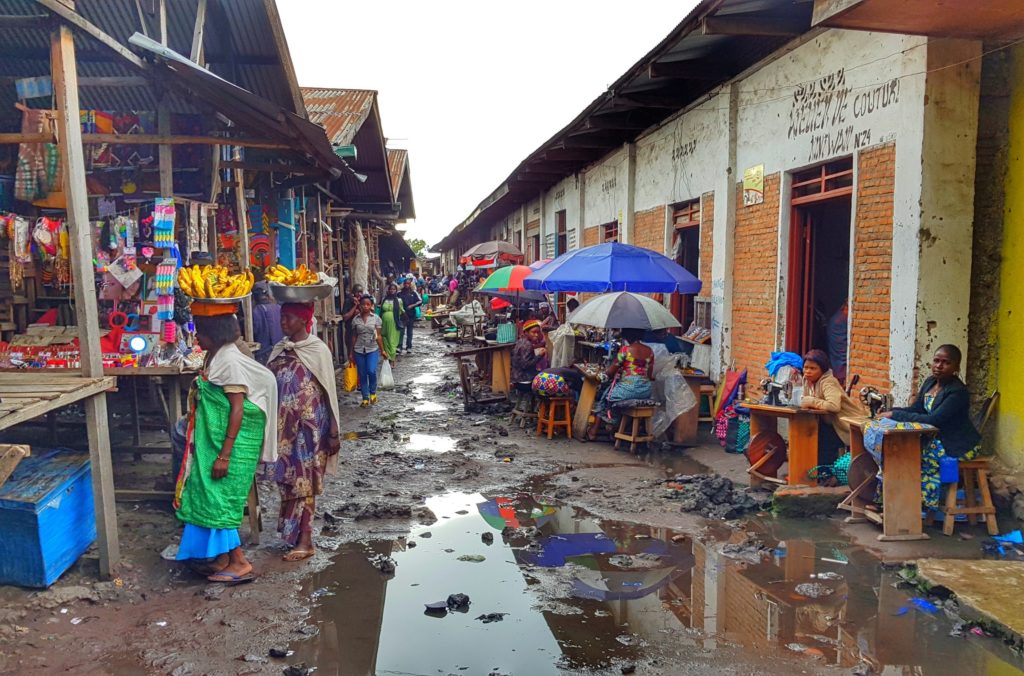 Overall, What an experience! The climb was probably my favorite of all the climbs I have done around the world. I can only hope Conga gets safer and more travel-friendly in a near future, as I really want to discover more into the center of the country. Congo is one of the largest countries in Africa and contains so much untouched nature to be discovered. One thing for sure: I’ll be back! 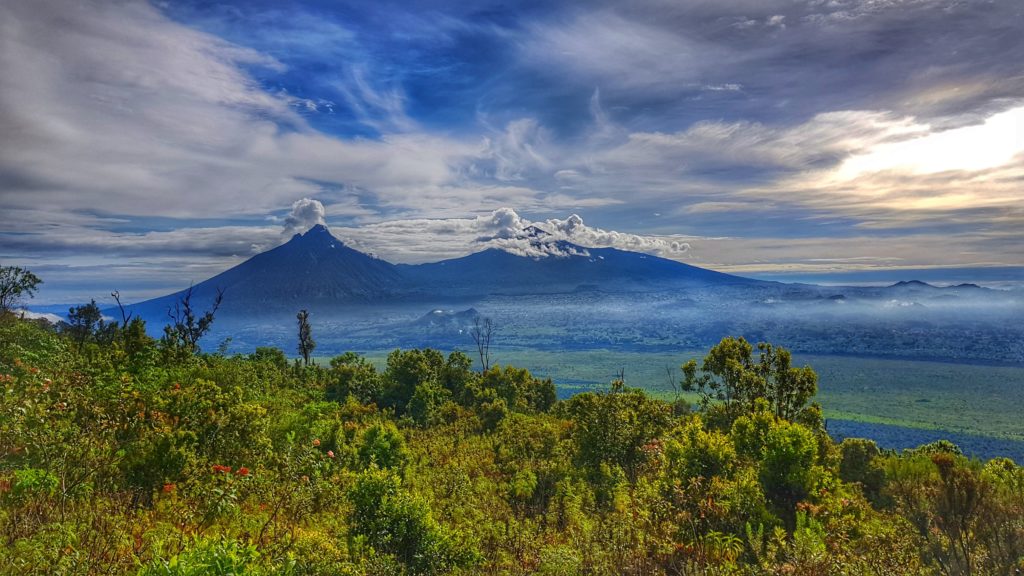 Other Volcanos around the region 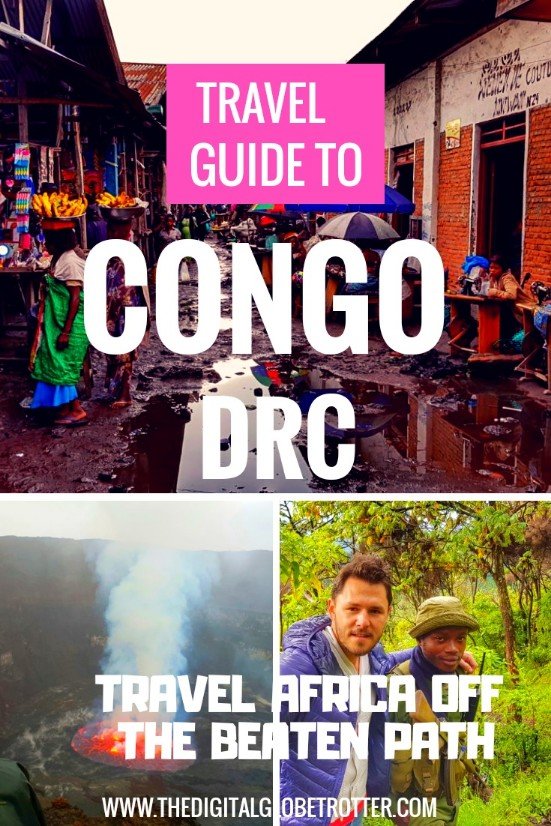 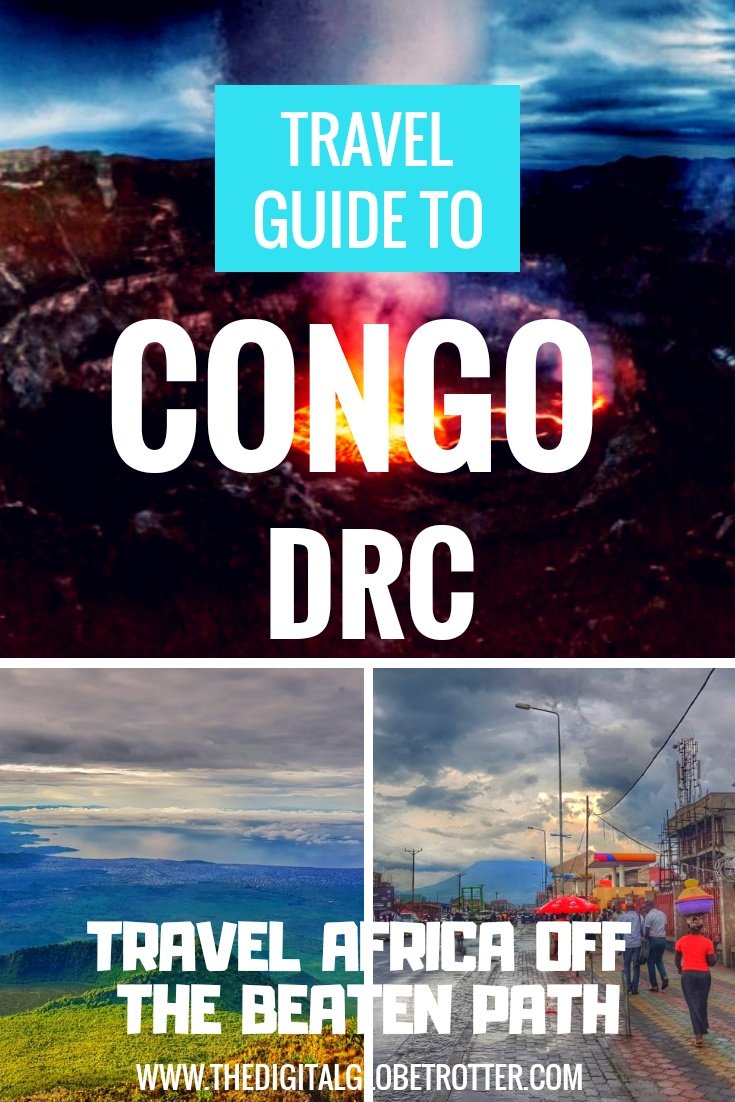 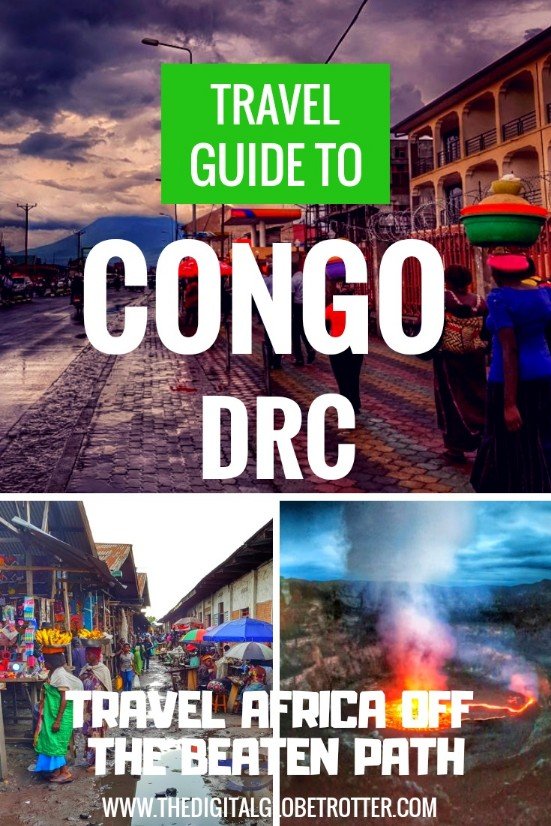