After more than a decade sailing the world since 2010, the MSC Magnifica still rules the seas with its magnificent “old style cruising” layout, a lot of passenger space, and comfortable bars compared to the newer Massive ships that are being released by MSC. I have repeatedly argued in several of my previous cruise ships reviews how I personally prefer the old style cruises, being a more complete all-inclusive package of cruising, compared to the newer ships which always try to find clever ways to charge us extra money here and there. Surely, the business plan of MSC has changed, but thankfully for cruisers, that formula will not change for the Magnifica. So if cruising comfortably without too many new “perks” is your priority, then this ship easily makes it one of my top MSC experiences so far, out of more than 10 ships visited in the MSC fleet.

Special Note on the rating System: The rating system on my Cruise Reviews is based out of comparison to what many consider the best cruise line over the board: Royal Carribbean. In fact, Royal Caribbean has become so good at the game that they currently have a steady 25% of the clientele of cruise ships over the world, a very considerable amount. I must agree that Royal Caribbean is the best experience one can have on a cruise, and this is due to the fact that they are excellent in absolutely all the categories I list in my Rating articles. When I say excellent, this means they pretty much rank a 8/10 without exception. Some cruise lines may have one or two categories with higher ratings than RCCL, but may lack in other categories. So in my rating system, for comparison purposes, if a category ranks 7/10, it means it is lesser than the RCCL’s average, while a 9/10 means an Exceptional rating, better than the RCCL Average.

A Comfortable ship that aged well

It may be more than a decade from the date of review, that the Magnifica has been sailing the seven seas, and it already counts as one of the older boats of the MSC fleet. But it definitely doesn’t feel so. I found the overall state of the ship to be really well-maintained, and still feels up-to-date! Actually, compared to the newer ships which can sometimes feel like made of paper with their “Zara store style”, the Magnifica has pretty much kept a universal style with nice bars, stylish restaurants, and overall, a great general feel. This is in alignment with older ships built around the 2010s, where comfortable sailing with fewer passengers was a priority, compared to the newer ships with 6000+ passengers cramped together in tighter space. 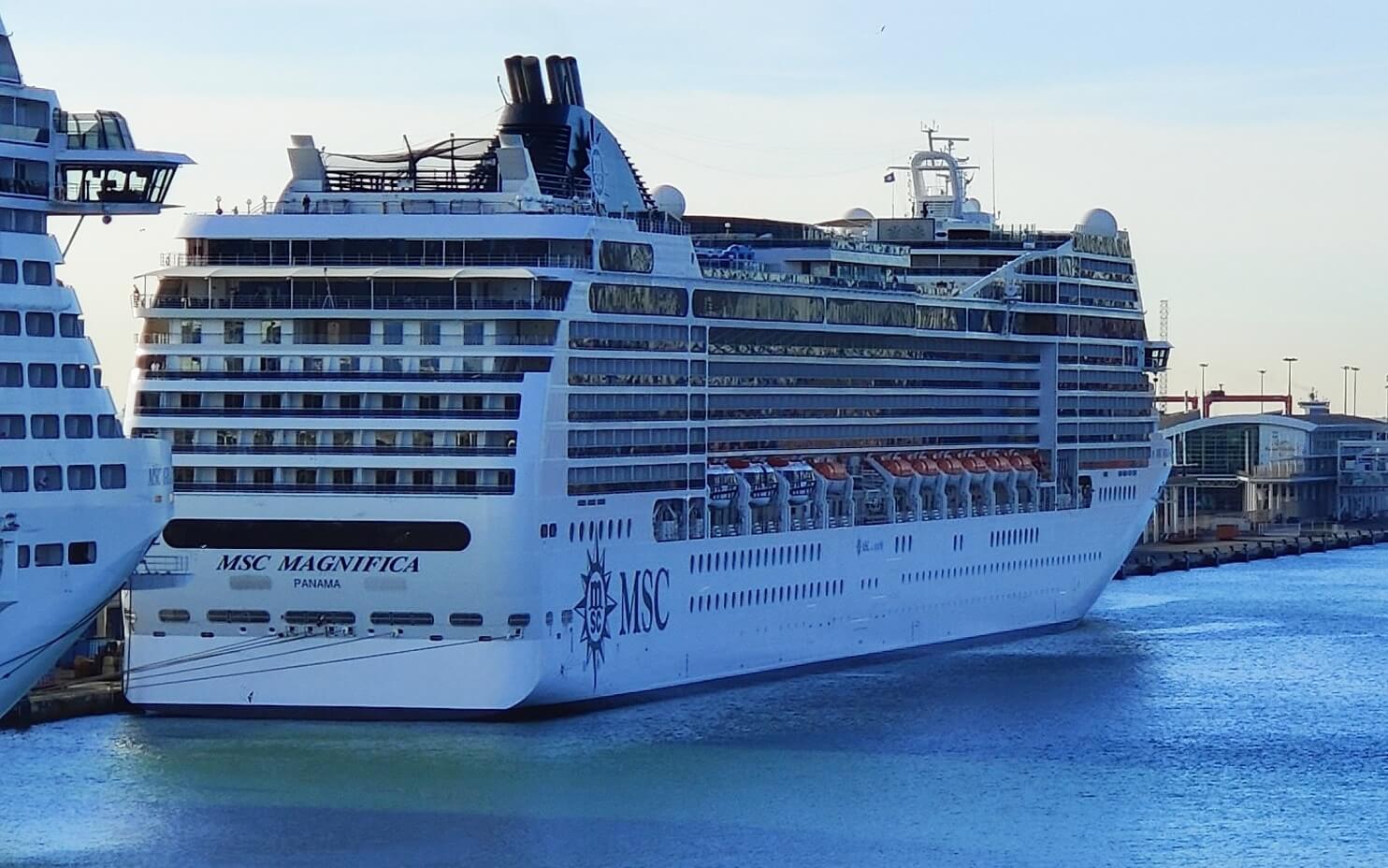 With many newer ships being launched yearly, and with covid times marking the reset of the cruise industry, MSC might have had a hard time gathering enough animation staff to fill its ranks on older ships like the Magnifica. This could be felt with an animation team which was usually smaller than the usual standards, and less present in the overall experience on the ship. But it definitely was not the worst team I have seen, and the animation team earns credits for the games they would present throughout the cruise.
The musicians were generally good to entertain the crowds and with so many rooms and bars on the ship, there was always a good show where one could sit to listen to music. It would have been nice to have a dedicated Latin band like many ships in the industry usually have. Those always keep the crowd happy to join the dance floor with salsa, merengue, and bachata. This time the Latin segment was done by an italian band that couldn’t quite get the Latin vibe correctly. Their Italian covers were pretty good though.

The theater is massive and is set up on two floors. This is an big bonus, compared to newer ships where the theater has been reduced to a fraction of the size of older ships, in order to sell their “premium show” at an extra cost. This is a welcome asset for older ships that I always emphasize on, as passengers usually always get better shows than on newer ships!
However, after the first 2 nights, I was a little bit disappointed with the shows… The traditional broadway shows that are usually synonymous with cruise holidays were not exactly on point, and there was a little lack of the usual cast. However, after a few shows, I understood the composition of the cast was different this time around, and it was not necessarily for the worst. Just a little different, to say the least.
First, there were only 2 signers, composed of 1 male, and 1 female. This felt weird at the beginning as the usual composition is to have 4 signers. But the quality of their voice made up for the lack of extra voices, as they were great singers (especially the male signer).

The Christmas Special, aboard the MSC Magnifica

What made the big difference in the cast compared to other ships, was their focus on “circus-style acrobats”, and fewer dancers and singers. They had no less than 4 pairs of acrobats; 2 male acrobats, 1 couple of acrobats, 2 Asian contortionists, and the classic and beloved trio of African acrobats!
Overall, the quality of the shows was satisfactory, but not to the level of the traditional shows of MSC, which used to hold the status of “kings of shows at sea”. Adding two extra singers and a few more dancers would help retain their title.
Result Theater Shows: 6/10

The rooms in general were a little cramped for the inside cabins and much bigger for the outside cabins. This is in line with the category of ship that the Magnifica is part of, just like the MSC Poesia and the Msc Musica which I had sailed previously. The cabins are generally well sound proof compared with newer ships and are maintained very clean by cabin staff. Nothing out of the ordinary, except for the smaller size of inside cabins which I experienced.
Result Room Comfort: 6/10

The service on the ship is really good in general, an aspect that MSC has greatly improved over the years, compared to mid-2010. The team of waiters was well-trained and fairly quick. The staff on board were very polite and were always greeting people every time they would cross paths. So in general, it was felt that there was a strict procedure for all staff to respect when encountering passengers, to make them feel comfortable and welcomed onboard.
Result Service Quality: 7/10

The boat was generally kept clean, even though at times it could feel a little cramped. This was understandable considering the ship was at full capacity while reviewing it. But nothing critical was noted. Gel dispensers were available throughout the ship. I believe there could have been more emphasis on cleaning crowded buffet areas where hand contact was frequent. But overall, nothing too concerning and out of the ordinary
Result Cleanliness: 6/10

The food on the MSC Magnifica was satisfactory and better than newer ships, in my opinion. The Upstairs buffet was good and was equipped with a large salad bar, which is a nice bonus (salad bars are smaller on newer ships). The food selection is on par with the MSC experience in general, which is always a little weaker than other main cruising companies.
The restaurant rooms were of good quality, and the food felt good and diversified nightly. Since this was a Christmas cruise, I was really surprised that MSC finally offered the traditional Lobster night, on Christmas eve. Most cruise ships offer this once per cruise, and is highly appreciated by passengers, and has always been a negative point for me, testifying of the cheaper quality food on MSC cruises, compared to industry standards. But this time around, we were treated with a nice lobster meal. However, I wasn’t able to add extra points for the “special night” we experienced, for the simple fact that my review needs to stay general for the typical experience one can expect on their cruise on a normal day.  And I would give a “satisfactory” rating for the MSC Magnifica.
Result Food: 6/10

The Christmas dinner special, Lobster! (never seen on any MSC cruises before)

The passengers on board reflect the typical Italian cruise experience in the western Mediterranean route, composed of a majority of Italians, French, and Spaniards. So nothing out of the ordinary, except for the how the number of kids and teenagers that was found on board at the time of sailing. However, this could be attributed to the Christmas holiday season and should be less in normal conditions. Overall, the passengers felt well-mannered and respectful of others.

As I have stated many times in previous reviews of MSC ships, I love older ships of the MSC fleet. They feel roomier, more comfortable, and have an overall great all-inclusive experience. The MSC Magnifica is no different and really provides a great structure to enjoy a holiday with family or on a romantic cruise. It checks most boxes of what good cruises need in order to make the most out of it. And even though it is not a luxury cruise and is not intended to be, if one comes with an open mind and isn’t looking for perfection all across the board, they will leave satisfied with their experience.
Quality/price factor needs to be taken into consideration in evaluating the MSC Magnifica, and this is where the boat really shines! With so many new mega ships being launched, great deals can be found for older ships like the Magnifica and provides amazing quality/price value of cruising.
Would I come back on the MSC Magnifica? If I found a good deal and was near the departure port, I surely would do it!
Overall satisfaction: 7/10