This Article is part of my series about comparing every country in the world between each other, from the perspective of a man who has traveled all of them, 188/196 to be precise. After creating the most beautiful countries map, the best food in the world map or even the best quality price countries, this article focuses on the most friendly countries to travel to. It must be understood that the context here when I say “friendly to the traveler” is how welcoming a country is to visitors at first sight, and not necessarily about the population in general. I also tried to be objective in my way to rate them, even though it also reflects a little bit my personal experiences. As a traveler with an open mind, I do not care about religion or race, I am an observer of humans in general and human behavior everywhere I go, and this map is meant to be taken as a grain of salt. Nevertheless, I get asked very often the most friendly nations I’ve been to so I guess there is a general interest in a map like this.

The Map of the Friendliest, Most Welcoming Countries

So from Orange (the least welcoming) to dark green (the most welcoming), here is the map in question. I provide details on my choices in the other sections below. 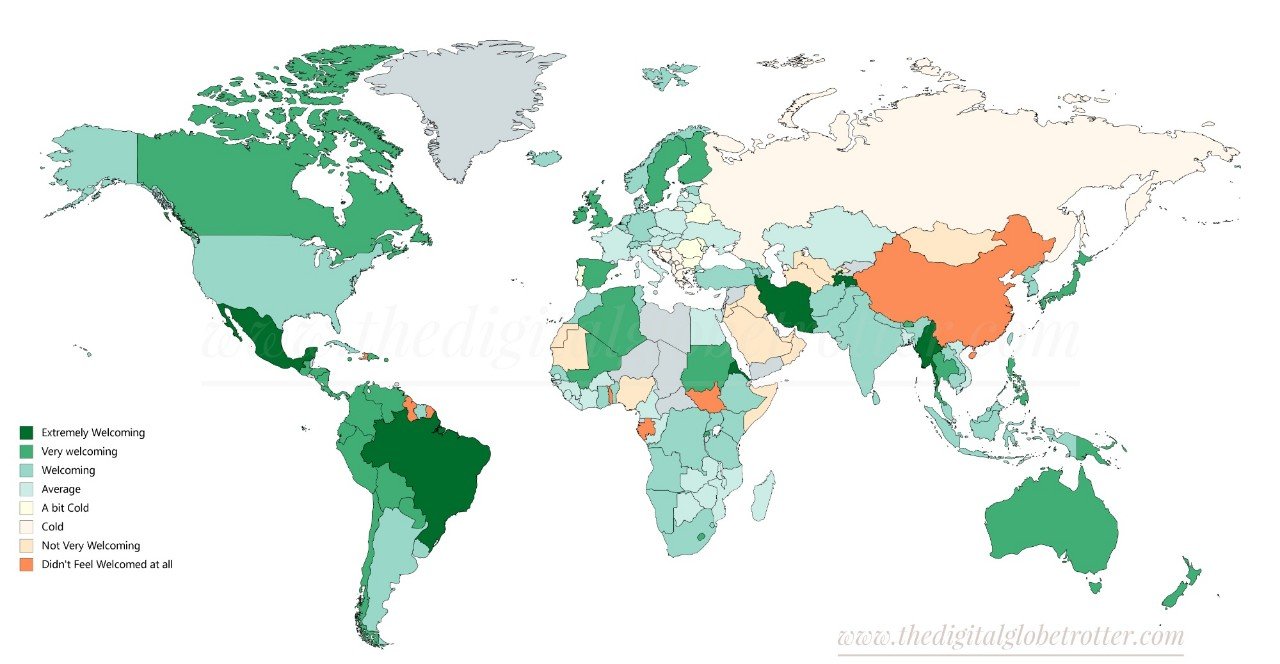 Details on the 7 Friendliest Countries in the world

Some of the friendliest countries I’ve been to will not even be visible on this map. MAny islands around the world are friendly, and one of the top spots probably goes to Fiji. It is very often in the travel community to mention FIJI as the friendliest country, their hospitability is incomparable and I can attest it is true! They really have a massive heart and as soon as someone arrives at the airport, they will be received with a big smile from everyone! Other countries high on the list are Brazil and Mexico. Brazilian people are known to take life easily and being welcoming and receptive is a way of life. However, I believe Mexico is probably the most welcoming country in the world as a whole! Their friendship is one of the most truthful I have seen around the world, and I have personally made very deep friendships that even after decades are still very strong!

Two other interesting countries that I believe are Extremely welcoming are Iran and Tajikistan, two Persian countries! I have been received so well in Iran, that in a 10 days visit, I have been invited to 2 weddings by complete strangers! I was also blown away by how welcoming Tajik people are when I was received in a Tajik family in Dushanbe for 2 weeks back in 2012. My last noticeable country to mention is Myanmar. I believe all of South-East Asia to be extremely friendly, and Myanmar appeared to me to be the friendliest! I think this could be explained by the fact that still, very few tourists had been there at the time I visited in 2014, which could result in “the first time traveler” curiosity. But nevertheless, their receptivity was so impressive that they deserve a special mention on this list!

The last one is Eritrea, this East-Africa nation that is so closed to the outside world that tourism is still very exceptional. I have written about my experience over there in a previous article, where I stated how I believe Eritrea to be one of the best-kept secrets of Africa in terms of beauty and friendliness!

Most countries fall in this section because in general, people are friendly everywhere. We are all humans and we are all curious about people coming from other countries. South America is always friendly, and thus, I have rated it very high on the Map. South-East Asians are comparable, very welcoming, as well as South-Asia. Pakistan was extremely welcoming when I visited in 2017 as I have explained in a newspaper interview in Peshawar on the border of Afghanistan! Africa is also known for its friendly population all over the continent, except for a few exceptions I have encountered and which are usually not related to the people but to their political situation and their government. In general, Europe is friendly and welcoming, but many people criticize some ultra-touristic cities like Paris or Rome to be unfriendly with tourists. This is due to the overflow of tourist on the “tourist trail” and when I hear this I usually recommend judging the country not from its capitals and major cities, but from its smaller cities where people have less contact with tourists. This will result in a much more realistic opinion.

In general, I am a very positive person and always forget about the negativity of an experience, keeping only the good moments in my mind. Thus, I believe the whole world to be friendly. However, I rated some countries as less welcoming because this is the comments I get from other travelers alike. For example, since I speak Russian and I understand how Russians think, I believe Russia to be very welcoming to me and I would have rated it much higher on my list. But it is the general consensus among travelers that Russians can be a bit plain and raw at first sight and for most travelers used to receive a “hey how are you doing today!!” from a complete stranger, it is not Russian customs to give a “fake hello” to somebody they don’t know. Russians believe that if they don’t know somebody, this person does not deserve their love so easily. However as soon as a Russian opens up and trusts somebody, their friendliness is the most Legitimate of any nations I have encountered and as truthful as one can get. But for the time being, I had to rate Russia in the lower part as this is the type of experience first-time travelers will experience. A bad reception I usually receive is in China. I have heard this from several travelers who have traveled around China. The general feeling one will get is that Chinese will be curious about the traveler but will be unwilling to help. This is interesting because I don’t believe Chinese people to be rude in other countries with large Chinese populations such as Taiwan or Malaysia. Its really about mainland China, and I believe it’s about the way chinse society is run that creates this unwelcoming effect on their population.

I love traveling and meeting new people especially when they are welcoming to me. I always try to arrive with a smile on my face as much as possible, because I believe the way I approach others will reflect the way they treat me. So my recommendation is to always ask yourself if the way someone behaves is a result of your behavior. In most cases, it will. Spread love and you shall collect love!

So what do you think about this map? Does it reflect the same friendliness you have experienced in some countries you visited? Would you have rated some other countries higher, lower? I am interested in your opinion, please let me know in the comments below how you feel about it. 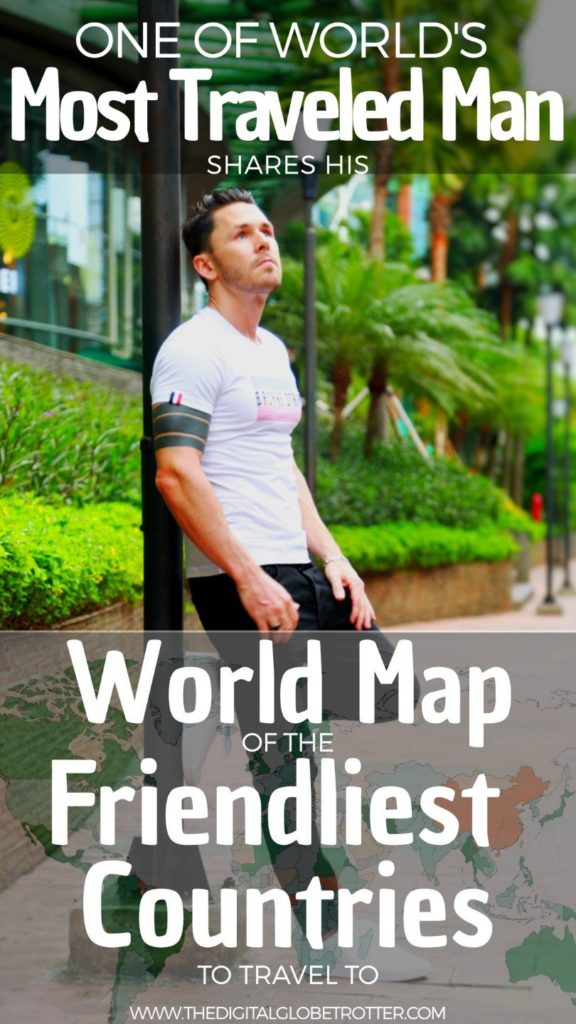 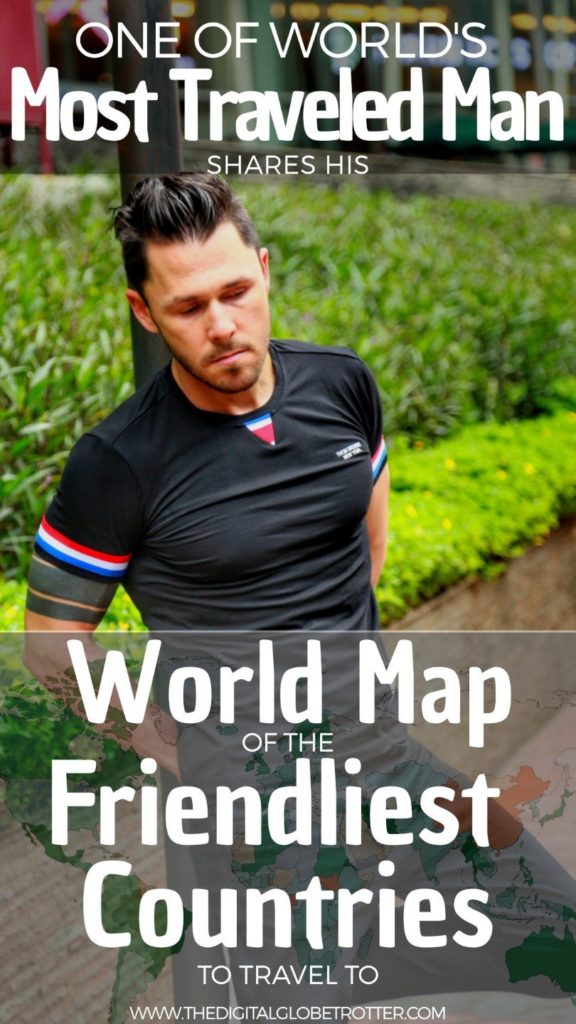 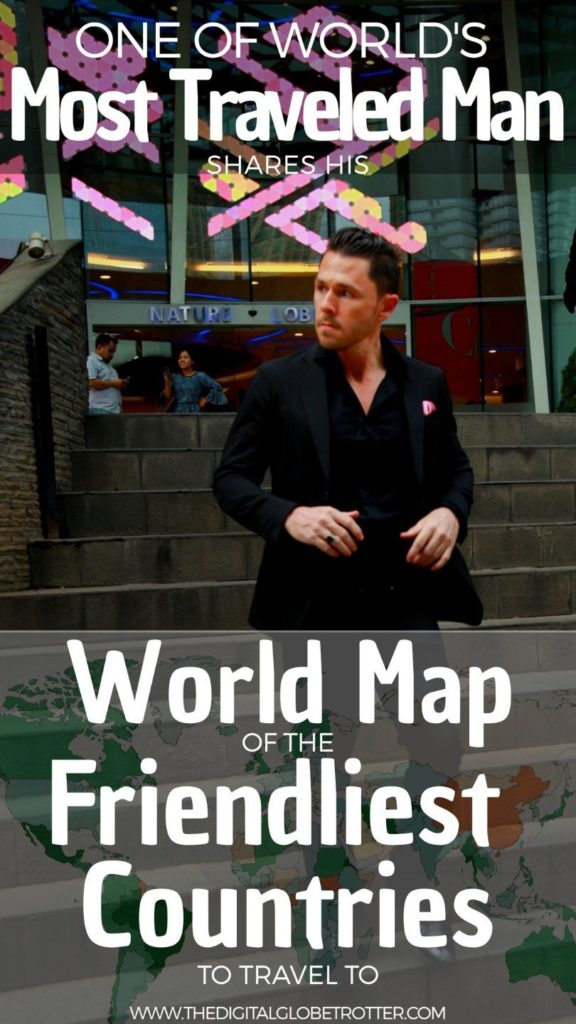