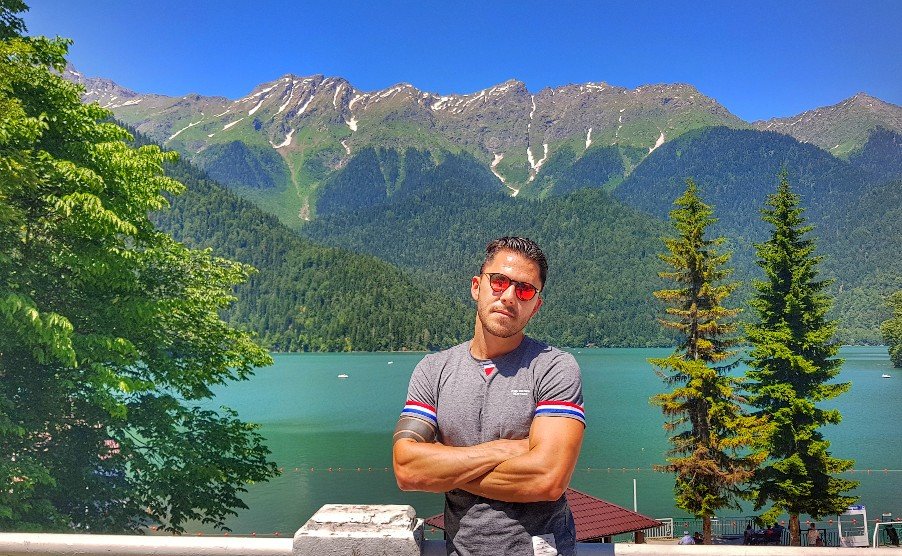 Considered by many to be the most beautiful region of the Caucasus with its beautiful semi-tropical sunshine coast and some of the highest mountains in Europe, all packed in a tiny country, Abkhazia has had its share of drama in the past 20 years. No doubt that the beauty and strategic location of this land have played an important role in the long-lasting disputes with Georgia, which led to one of the bloodiest conflicts in the post-soviet area. Nowadays, the country still feels like it’s freshly out of war with destroyed houses everywhere, bullet holes still visible on building facades and very little rebuilt infrastructure. But its Natural beauty definitely compensates for the ruins left behind for the Visitor.

A bit of history

Abkhazia was not so long ago an integral part of Georgia until its separatist movement went to war to seek independence and resulted in a still unresolved status. Russia, which acts a bit as its supreme guide largely helped them to separate, and is one of the very few countries that recognize Abkhazia as a sovereign nation, the rest of the world still consider it a part of Georgia even though Georgian hasn’t set foot on its territory for over a decade. 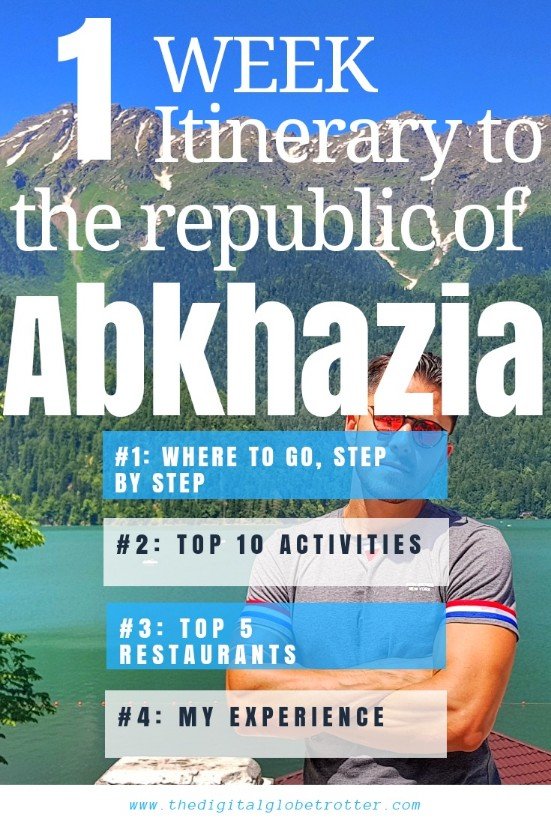 For a very long time, Abkhazia has been on my Radar as a must go “country” to visit. Every time a Georgian talks about Abkhazia, they have to tell me how it was the most beautiful part of Georgia before, followed by nostalgia. In reality, after being a week in Abkhazia, it appears to me that Abkhazian culture has very quickly blended into the Russian culture. I have heard a handful of times people speak the local language, as 99.9% of the people will speak only Russian between each other. It also seems like nobody speaks English at all and communication can definitely be a problem for visiting tourists. They are definitely not ready for international tourism, as their industry is deeply adapted only for Russian tourists which consist of 99% of all tourists.

Arriving in the Capital of Sokhum, I was really surprised by how slowly the country has recovered since the war. Around the center, at least 15 to 20% of the houses are still abandoned or destroyed, with no visible pans to clean up. An inhabited house in ruins could be just next to a mansion with expensive cars in the parking lot. Cars are another really interesting fact about the country. As poor as the capital looks, everybody seems to have the latest model of luxury car available! Porsche, Mercedes, Audi, BMW. Even among other foreign tourists I’ve seen, we were blown away by this fact. We agreed that about 15% to 25% of all cars in Sukhumi with Abkhazian plates were luxury cars, a statistic which would put to shame even some cities in Germany! Anyway, for whatever reason these cars are there, I was puzzled asking myself why people wouldn’t invest in focus efforts on reconstructing their capital before affording toys like these.

How to get an Abkhazian Visa

It is much easier to visit Abkhazia nowadays as two options are now available since 2017. First, the border in the north with Russia which is modern and well organized, also offering “on arrival visas” and pain-free transport around the country. Most people use this border as most tourists are Russians, but it must be noted that a Russian double entry visa is absolutely necessary since you will need to get back through the Russian border, on-going travel to Georgia not being an option. The second option is the recently opened border in the south with Georgia. Same applies here: who goes in from Georgia must come back through Georgia and cannot continue to Russia. For this border, you must apply online for a visa permission, which will need to be picked up within three days of entering the country, in Sokhum. You can apply for the visa here and should receive an answer from the ministry of foreign affairs within 7 days. 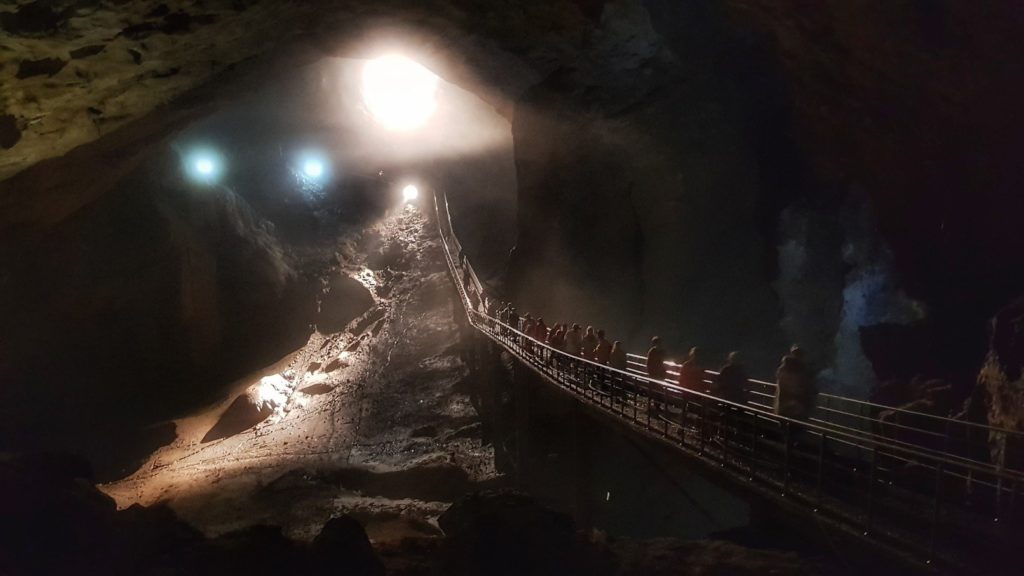 I heard a lot about Abkhazian wines before coming and as a wine, lover I was excited to be there and test them out. After a month in Georgia and even experiencing a wine festival in Tbilisi, I have had discussions with locals about what Abkhazia had to offer in terms of wine. Unfortunately, my experience wasn’t positive. I tried at least 15 to 20 wines while in Abkhazia and all of them were not to my taste. I would describe them all as very sweet. In fact, way too sweet, and half of them taste more like grape juice than actual wine. I only tried 3 dry wines but I wasn’t impressed by them either. the best wine I had was a homemade wine from a family guest house in Novi Afon! Even at a wine tasting, we got mostly juice from all their wines. My guess to explain this situation is that they probably keep their best wine for local consumption and provide the young wines to the Russian tourist which have not much of a wine culture and can’t tell the difference. They actually seemed to love it and bought them in Mass.

One Week Itinerary around Abkhazia

Within Abkhazia, the most developed part of the country is the North from Sokhum where tourist infrastructure is the most important. Sokhum makes an interesting stop but it doesn’t feel too welcoming compared to other interesting beaches in the country. Spend a day or two in the capital and walk around town to acknowledge the still very present traces of war with destroyed buildings everywhere. The beach is the most interesting part of Sokhum with a very long 4 to 5 km walk. In the summer many locals bath in the black sea but reserve your beach times for the north where it’s much nicer. One of my highlights in the capital was Narta Restaurant, located on the beach front and serving delicious Abkhazian Cuisine. That was by far my favorite restaurant in the whole country and I recommend spoiling a bit to try different dishes as they won’t cook them better elsewhere. 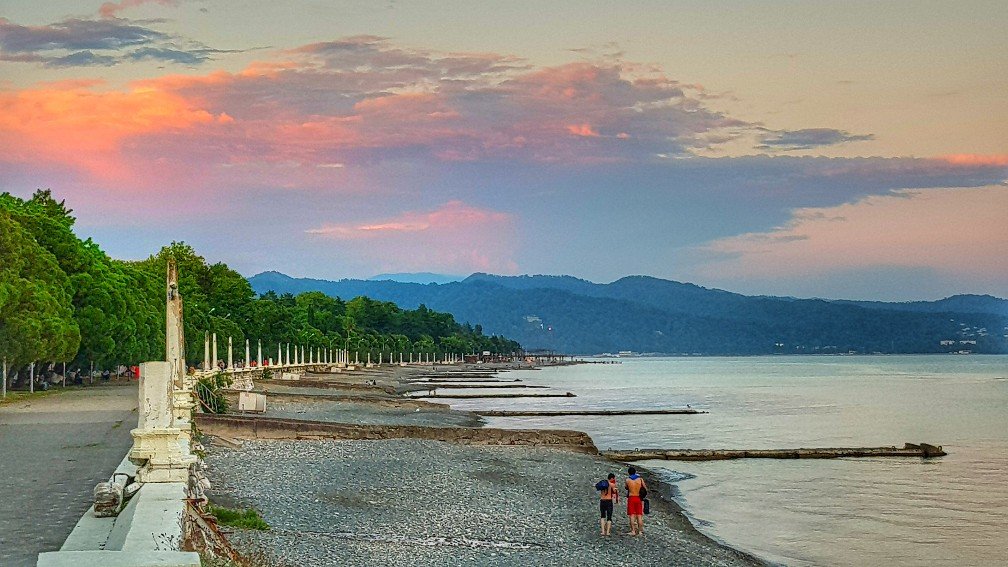 Spend 2 days in New Athos (a.k.a Novi Afon), the most beautiful and interesting city in Abkhazia. Most tourists will be on a day tour here, from Gagra or Sokhum so it gets busy during the day then empties up around 8 pm. But I recommend staying here as it really is peaceful and beautiful with its park and lakes, waterfalls and friendly locals. The highlight of Novi Afon is its Cave, known as the deepest cave in the world! a very well organized tour takes people to a legit metro station and riding the metro to the caves where people walk around 10 massive Cave halls decorated with stalagmite, stalactites and small lakes. I’ve seen caves around the world and this one deserves a medal as the most interesting I would say. note: Tours in Russian only.

Spend the afternoon to visit the Novi Afon Monastery, a majestic cathedral that reminded me of the Alexander Nevsky Cathedral in Sofia, Bulgaria. The most impressive part was the interior with amazing paintings mostly beautiful clear shades of blue. Walking around Novi Afon is delighting, try making it on top of the waterfall where there is a train tunnel. It’s really peaceful.

Gagra and Pitsunda are the other most popular cities in Abkhazia, oriented towards beachgoers, mostly for Russian tourists. the beaches are considered some of the nicest for Russians, but in my opinion, anybody visiting from countries with real sandy beaches will be greatly disappointed. There is no sand here only pebbles, and the beaches just like in Sokhum, feel like post-war ruins like the D-Day beaches around 1950. Little seems to be done to reconstruct the shoreline with broken cement and metal debris lying everywhere. Nobody seems to care though, not even the Russian tourists which just swim around the debris. so I guess this is the way it will stay and will be for a while.

The “must do” tour from Gagra or Sokhum is to go to Lake Ritsa. For about 13$, the day tour (with Russian guide) will bring you up the mountains through canyons and waterfalls, all the way to lake Ritsa where Stalin used to have his famous summer house. The lake is the pride in Abkhazia, and in a way, with the snowy mountains in the back, it reminded me of Lake Louise in Canada. The tour will bring you to several local attraction such as wine tasting and honey tasting. Yum!

My Opinion on Abkhazia

Overall, I had a positive experience in Abkhazia. I found Abkhazian to be very friendly, even the border guards were extremely nice to me! I was also very impressed with the semi-tropical nature of the job coast, reminding me of Brazil. I just loved to see all the fruits trees growing everywhere and vines in every garden. I will definitely come back to enjoy more of Abkhazia in a near future once it recovers a little more. 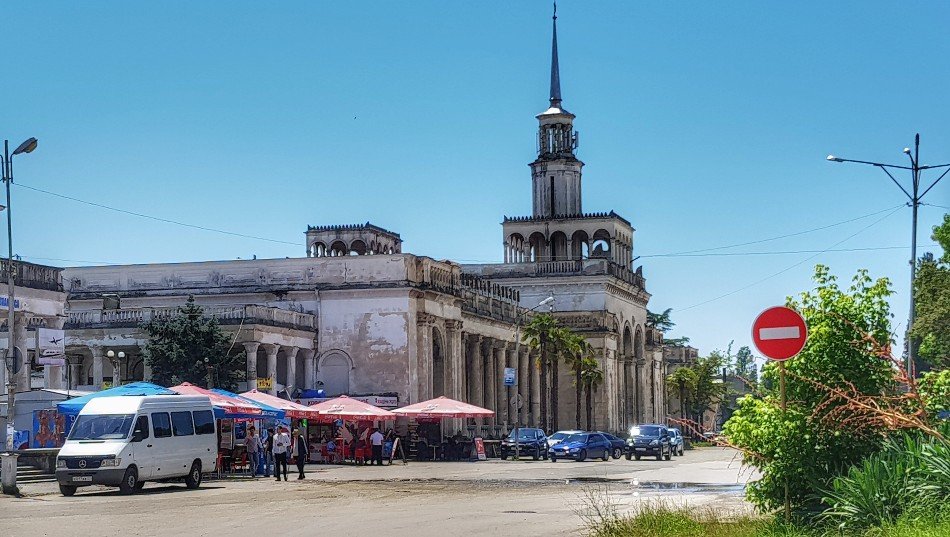 Top 10 Things to do in Abkhazia 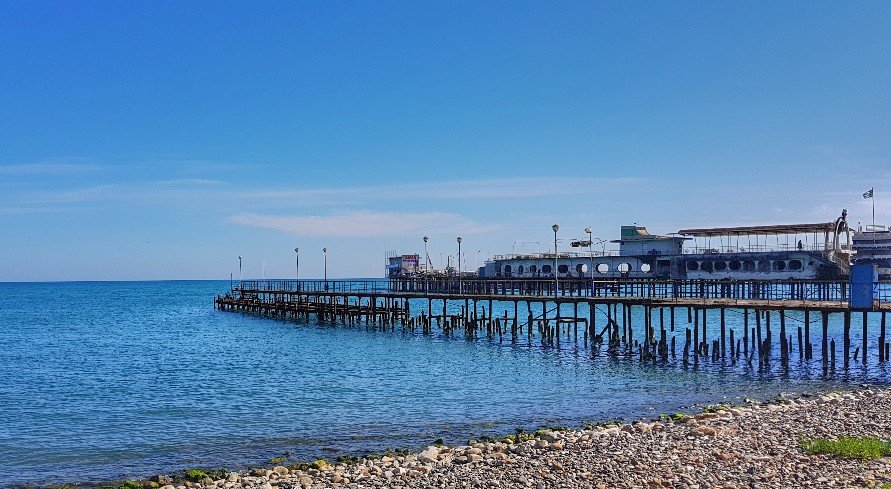 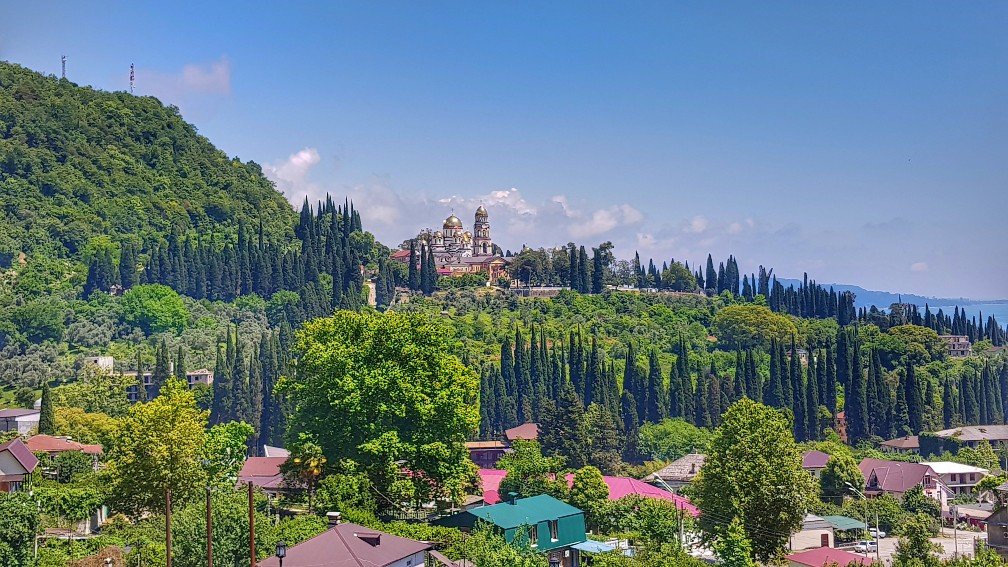 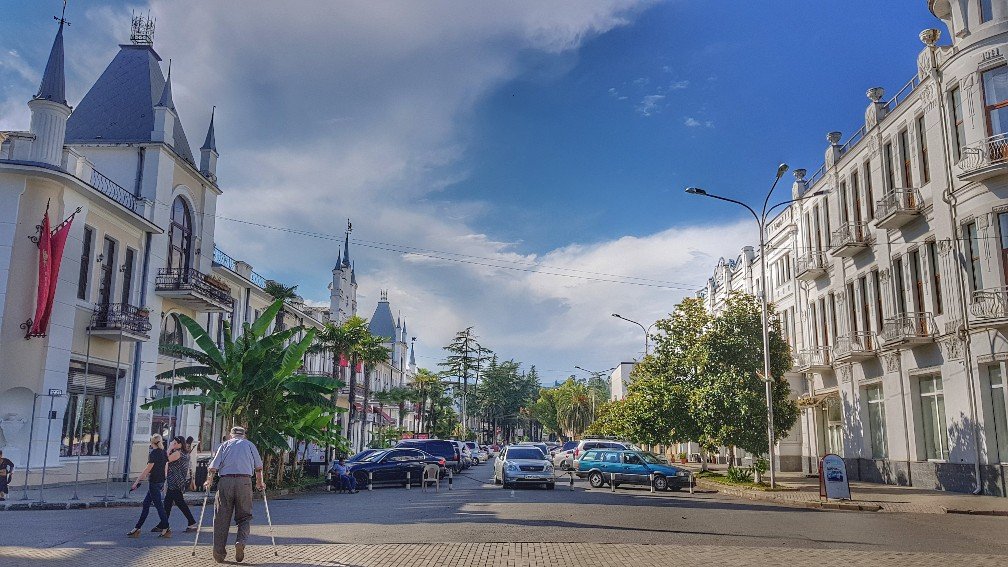 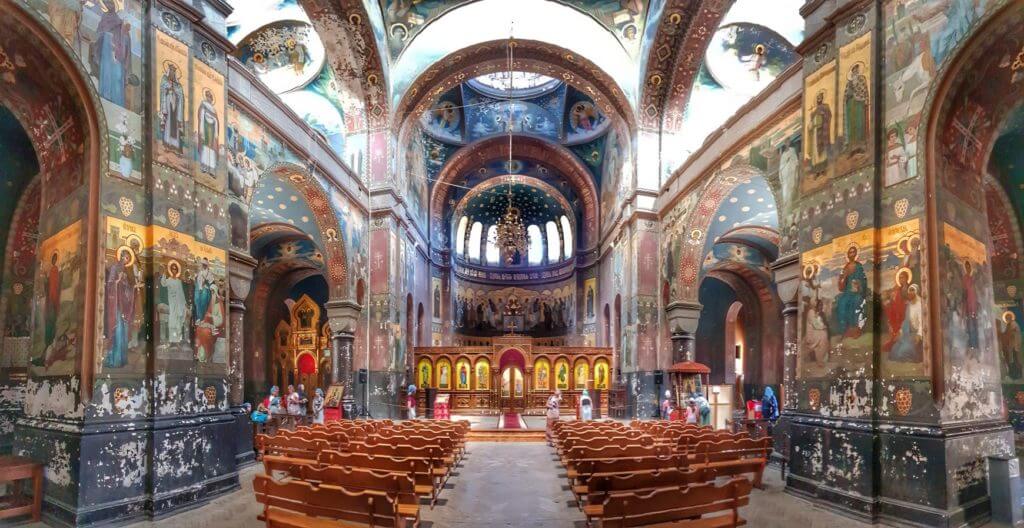 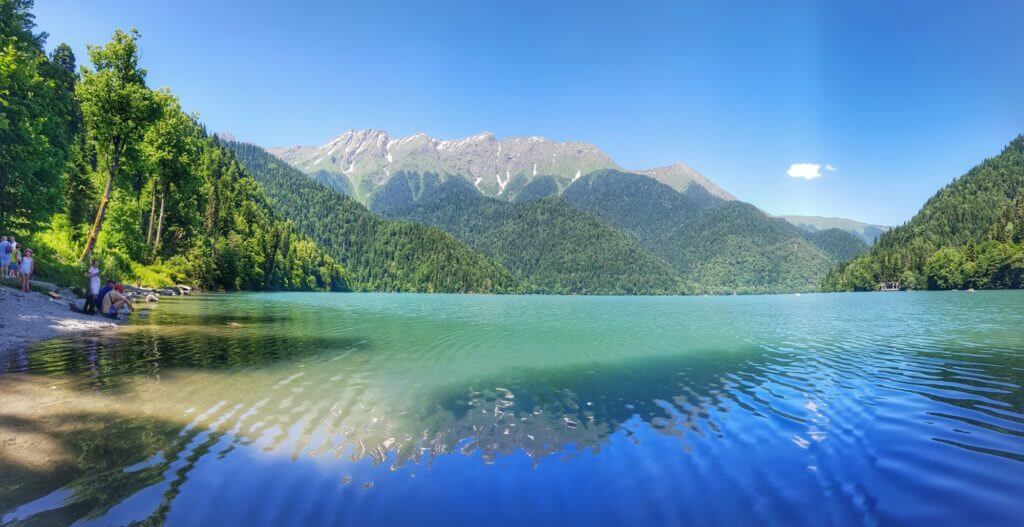 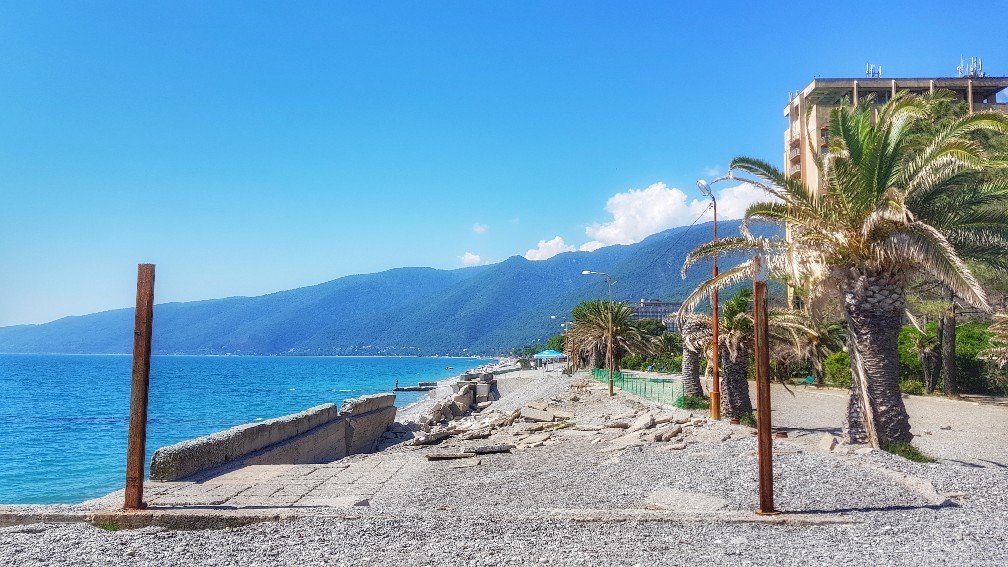 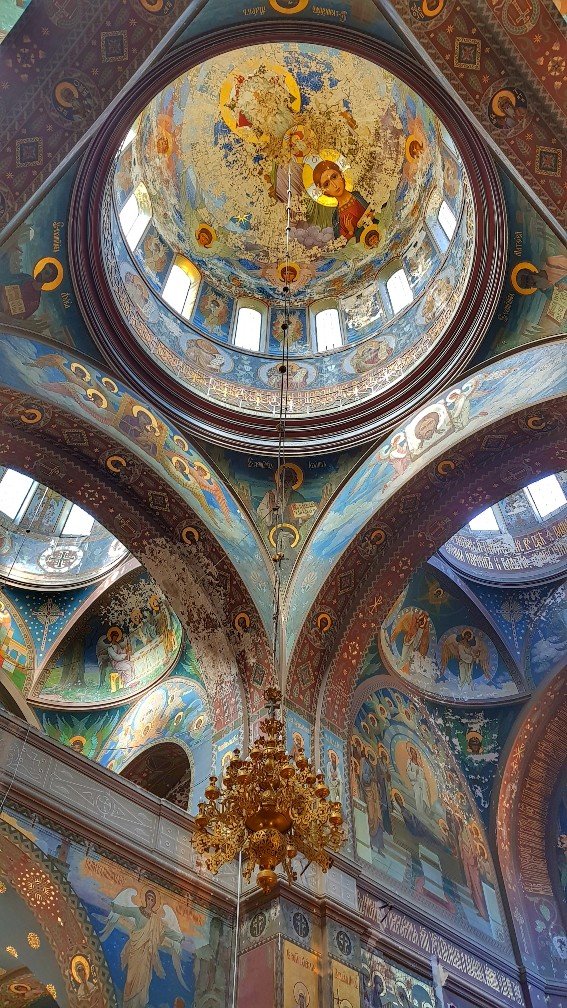 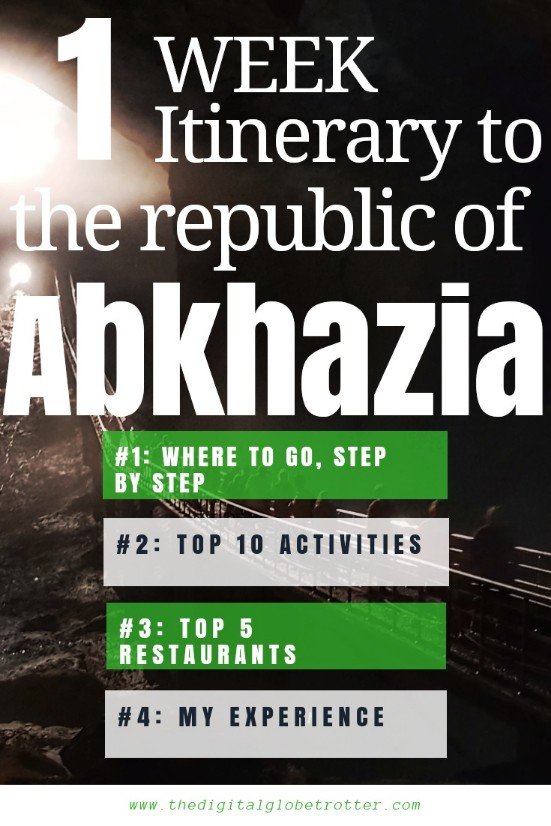 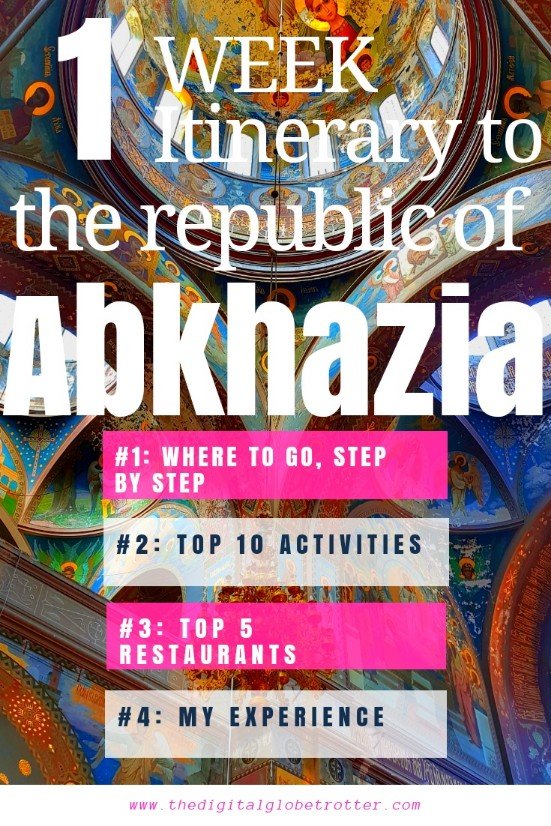