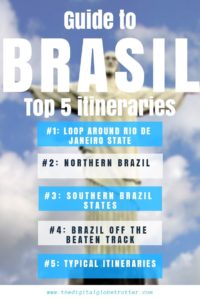 Brazil is my favorite country out of all the countries I’ve been in the world. Possibilities of itineraries are endless, as immense as Brazil is. If you’re looking to get the most out of the first visit of a week or two, I usually recommend to stick to the basics and travel around the state of Rio de Janeiro. Rio de Janeiro has so much to offer and usually represents the image of what Brazil is like for foreigners. But Brazil is very different in other states, this is why most first time visitors usually reference Rio as their favorite destination, as exotic as it is! Here is a list of my favorite ones. 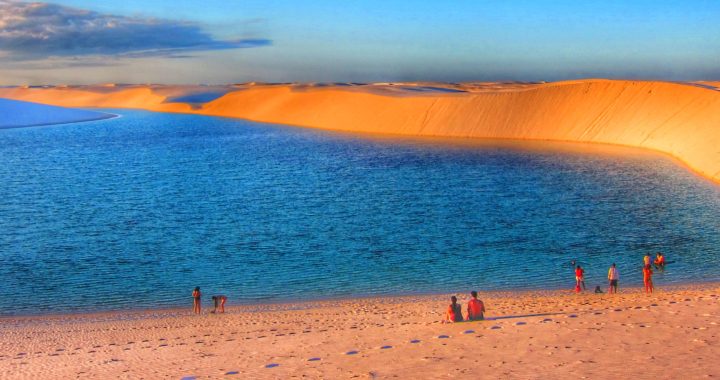 Itinerary one: Round tour around Rio de Janeiro State

Start and finish in Rio.  Rio deserves at least 3 to 4 days on its own, having so much to offer. I always recommend staying around the beach area, in Ipanema or Copacabana, I personally prefer straight in the middle, in Arpoador, where you get best of both worlds. Party in Lapa is a must, dinner in Santa Teresa neighborhood, enjoy live samba shows are always on my list every time I come, and if I can catch a bossa nova show, I try to make it (there is a great one at Praia Vermelha every Friday). Moving on, enjoy some beach time in Paraty about 3 hours away by local bus. From there, it’s an easy ride to the city of Ilha Grande where monkey hangs around trees and sipping coconuts on a hammock is a local favorite. I then recommend a few mountains around Petropolis, the only imperial city of the Americas. It has great waterfalls and jungle-like sceneries. Then it’s time for Buzios, about 3 hours north of Rio, a city was that mostly built by Argentinians, hence the style and luxury feel of the city! It’s a party place, to try to make it through the night. A bit more time I would include Minas Gerais, but that state is so big I would reservist it for a trip on its own!

I love the north of Brazil, like most people who love beaches will too. I usually recommend to people to travel from Salvador all the way up to Fortaleza, hitting on the way cities of Aracaju, Recife, Maceio, Joao Pessoa, Natal, and Fortaleza, reaching on the way Jericoacoara for an incredible experience! For those pushing a little further with more time, I highly recommend reaching Sao Luis to see my favorite natural wonder of Brazil (and probably in the world), the Lencois Maranhenses. Do not miss the flyover in a little plane, the views are just priceless!

Some people on a South American tour will prefer to go south from Rio de Janeiro, and that makes sense, as it is a great way to connect with the other great destination for every backpackers in South America: Buenos Aires. Some will hit Sao Paulo on the way, but I personally don’t like it. I think it’s overpriced and there’s nothing to see. Paulistas are very friendly though so if you happen to stay there a couple days, try the bohemian neighborhood of Vila Magdalena, it’s a favorite.

On the way down, I recommend stopping in Curitiba, its people are actually descendants of Ukrainians and Polish, so people get blonder and whiter skin. The other must stop is Florianopolis in Santa Catarina, a great little surfing spot. From there, Porto Alegre, the German city, is a nice spot too on your way to Uruguay.

Itinerary Four: Other Destinations and off the beaten track

Other destinations of choice include Minas Gerais, as a whole. I traveled on a rented car from Rio, up to Minas Gerais with its beautiful colonial towns, all the way up to Belo Horizonte, Brazil’s 5th biggest city. Then on the way back to Rio I crossed through the state of Espiritu Santo and reached its capital, Vitoria. Vitoria is definitely one of my “must go back” cities, a kind of miniature Rio de Janeiro with less tourist. From there, going back to Rio through the coast, with a nice stop to Buzios.

For those more adventurous, Going up the Amazon from Belem to Manaus is a great experience. I definitely recommend doing it the “local” way… By hopping on a local slow boat and do the expedition 5 days upstream the Amazon (or 5 days downstream from Manaus to Belem). I actually planned it so I arrived exactly on time for Parintins Carnival, known as the second biggest carnival after Rio, on an island halfway between Manaus and Belem. That was in itself worth the trip and turned out to be my favorite experience ever lived in Brazil. From Manaus, I traveled through Roraima and crossed into Venezuela, but I wouldn’t recommend it nowadays, with the crisis that is going on there.

Itinerary 5: Others and The typical

Some Brazilian Typical trips include traveling around Bahia with Porto Seguro as its main attraction.  After that, do what everybody actually does, by Visiting the Iguacu Falls. It’s typical, but it’s well worth it too!

Don’t forget to see the complete Brazil Page which I explain my own story through the years in this wonderful country. 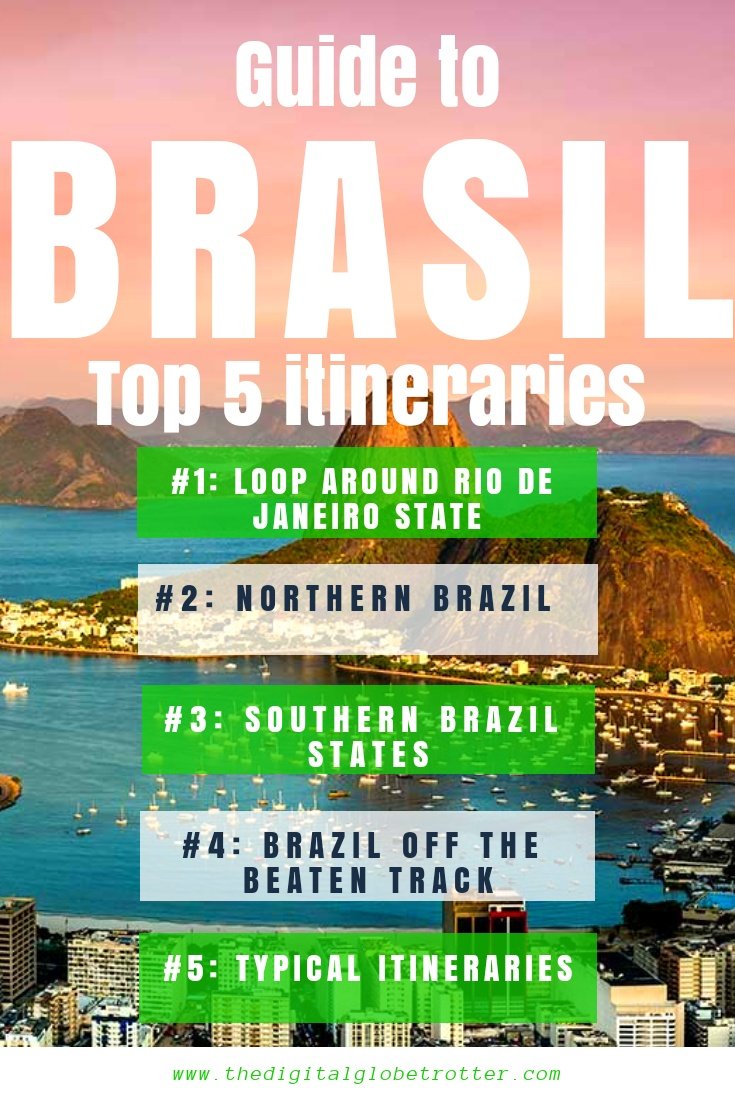 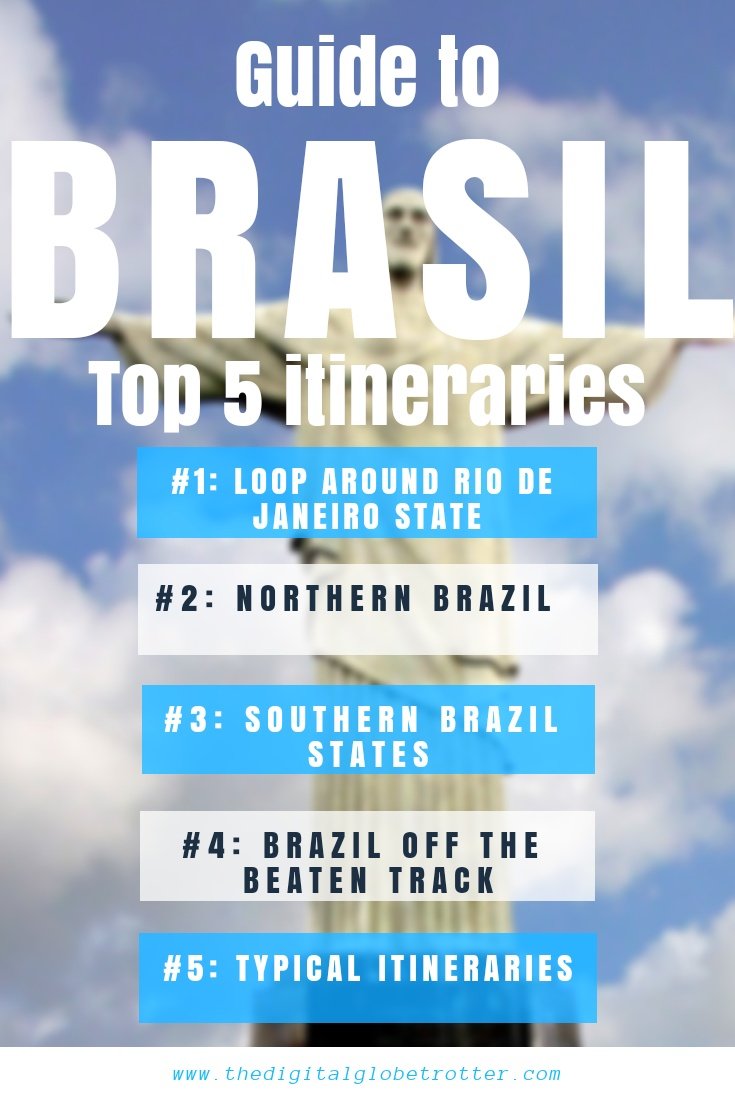