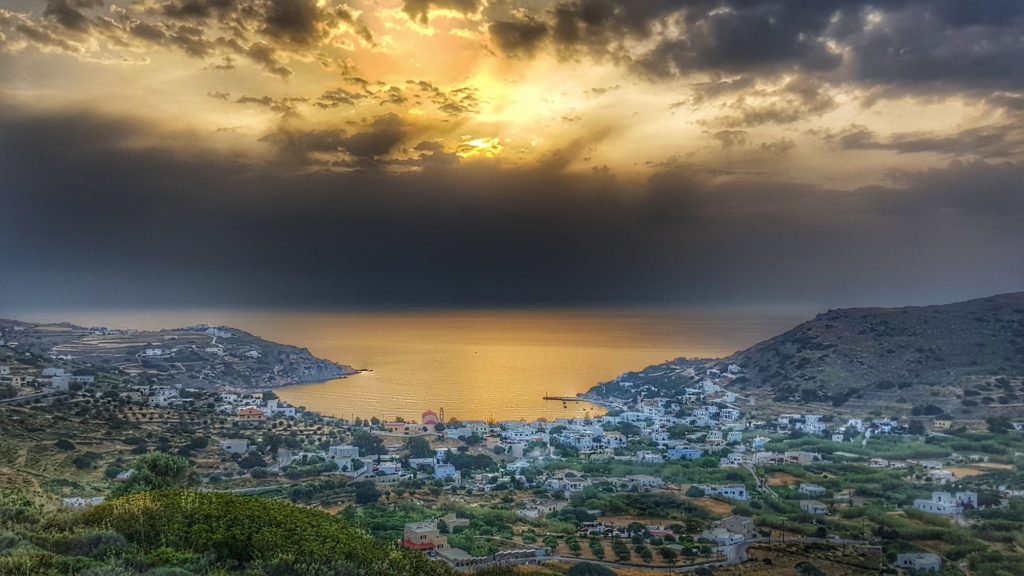 This year in Greece I wanted to try something different, a bit off the beaten track so I chose an island in the Cyclades which was not the usual stop for most travelers. Usually, tourists chose the usual 5 to 10 islands such as Mykonos, Santorini, Rhodes, Crete, or Ios for example. That was risky, because being there in springtime, it could end up being very quiet and most things shut down. But I happen to arrive on Labor day weekend, so I arrived in Syros with all the Athenians leaving the Capital to reach one of their favorite islands.

Syros is in fact one of the smallest of the Cyclades, but has the biggest population of all, making it the capital of the Cyclades. I haven’t found much information online about Syros but the little I found stated a little paradise which is unspoiled by international tourists, mostly frequented by Greeks. And what a surprise. This place is stunning! The Capital, Ermoupoli is a very attractive town, its streets built with white marble and limestone, making it look like a royal palace! Its most important landmark is the Catholic Church from the 13th century, the Agios Georgios Cathedral, built on top of the picturesque town of Ano Syros, worth spending an afternoon exploring on its own! The other landmark is on the other hill, the Orthodox Anastasios tou Sereos. There are a few beaches around the eastern side of Vaporio, close to the massive Agiou Nikolau church, providing stunning views of the city and a nice place to swim.

Downtown Ermoupoli is really nice, with the typical shopping street of Stamatiou Proriou and the other street right on the seafront filled with cafes and restaurants, on Akti Ethnikis Antistasis. That’s where most of the action happens and where most people go to be seen. The Town hall is gorgeous with its wide main square. An absolute must, if you are lucky enough to be there while there is a representation, is to attend a concert at the Appollon theater, a very small but really well-built theater that produces some amazing acoustics. I attended a show of a famous Greek Singer called Fotini Darra, beautiful women with an incredibly powerful voice which didn’t even need the microphone to push her voice through the theater.

The Island is so small and packed with beautiful towns that it is a must to discover on your own wheels. In one day you can cover the whole island going at a slow pace while visiting and bathing in a dozen beaches on the way. My favorite towns around the island were Kini Beach on the west side and my number one has to be Vari Beach in the south. Kini Beach is a small town with a nice little harbor for fishing boats, and a dozen cafes and restaurants around the beach. Vari Beach is set up in a bay which provides crystal clear and very calm waters for the best place to swim on the island! They have great restaurants and a lively atmosphere!

Overall, Syros has become surprisingly one of my favorite island in Greece, and I won’t hesitate to recommend my fellow travelers to spend a few days on their next Cyclades trip!

Start the first day exploring the Capital on foot as it is much easier to roam the area walking than with a vehicle. Go straight up in the morning to Ano Syros and have breakfast in one of the cafes with a view while exploring (and getting lost in the alleys). Continue to the other hill, and get to the Orthodox Anastaseos tou Sereos before continuing to the Vaporia neighborhood with its grand villas. Go down towards the sea to visit the Agiou Nikolau church. Just nearby, have lunch at Sta Vaporia, providing an interesting menu but the highlight is especially the view off the cliff. From there you can go down the stairs and Enjoy an afternoon swim at Astoria Beach. Coming back towards the center you can do some shopping around Stamatiou Proriou and Akti Ethnikis Antistasis street and the on the evening, enjoy dinner at sunset at one of the many restaurants on the seafront. Try to catch a representation at the theater if something is on, usually on Fridays and Saturdays. 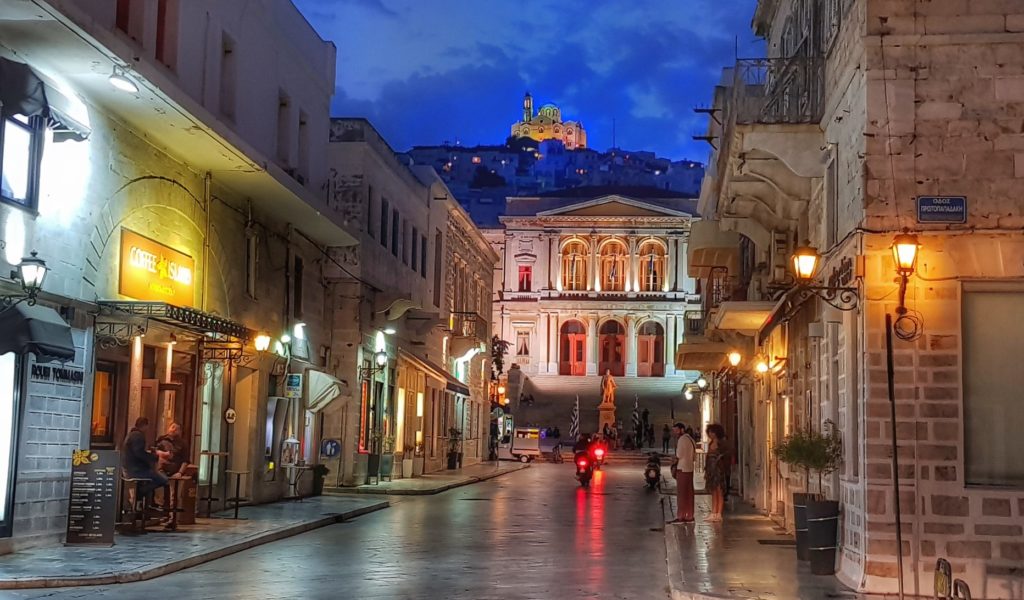 The Main square of Ano Syros

On day two, rent a motorbike and go on to explore the island. Go straight to Kini Beach crossing the island from east to west. Reaching the highest point will provide great views of Ermoupoli and on the way down, stunning views of Kini Beach and the Valley. Continue east and hit Galissas Beach and then to Posidonia following the coast for amazing views and pristine blue waters. Next is Komito all the way to Mega Gialos but reserve as much time as possible for Varis Beach in the south where I found it to be the best beach for swimming. Have lunch there at one of the many restaurants and enjoy the afternoon at the beach. Coming back to the capital you can take the smaller roads around Azolimnos and around the airport if time permits. Now head north to San Michalis which has a nice valley and views of the neighboring islands on both sides and especially for the Restaurant Plakostroto which makes its own cheese. For Sunset, go back to Kini which has the best view and have dinner at one of its restaurant on the beach front.

Day 3 can be spent in one of the towns for more exploring or staying in Ermoupoli for some cultural visits such as at the Archeological Museum. You can also visit the Apollo Theater if you couldn’t catch a show. The Plateia Square is worth spending some time. there is also the Industrial Museum of Ermoupoli which traces the shipbuilding history of Ermoupoli or you can also visit the Gallery Of The Cyclades for some local art. 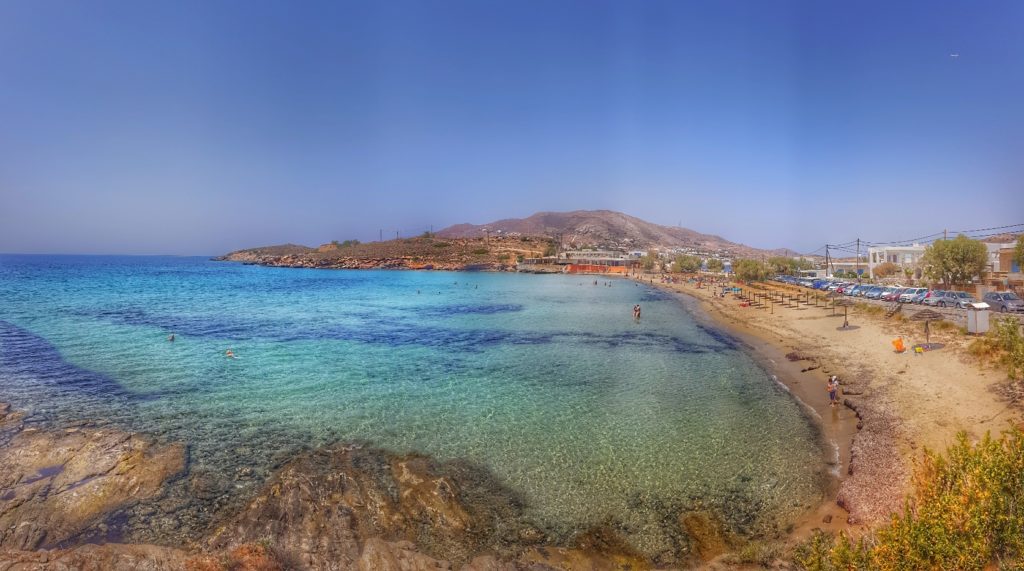 Top 10 Things to do in Syros 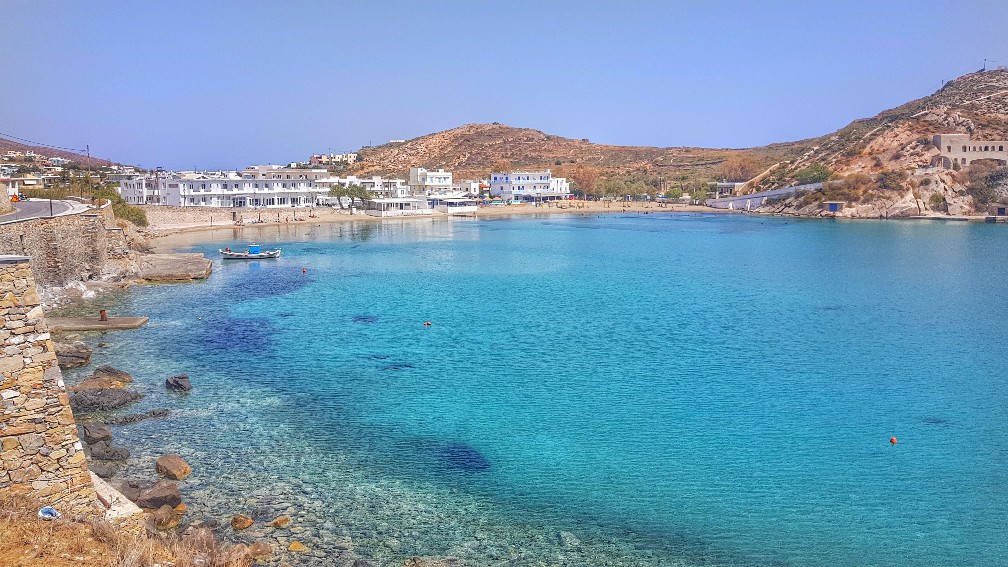 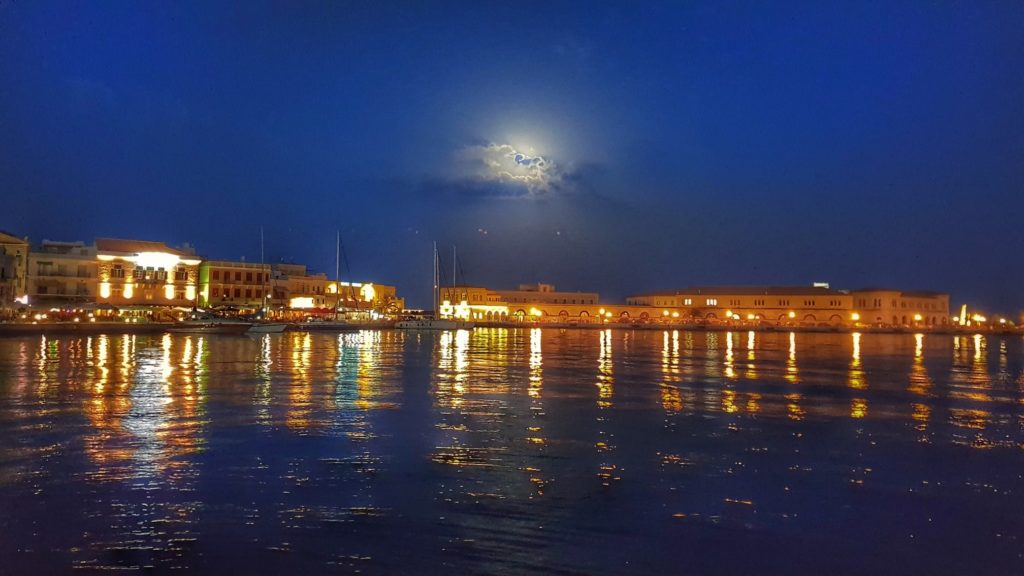 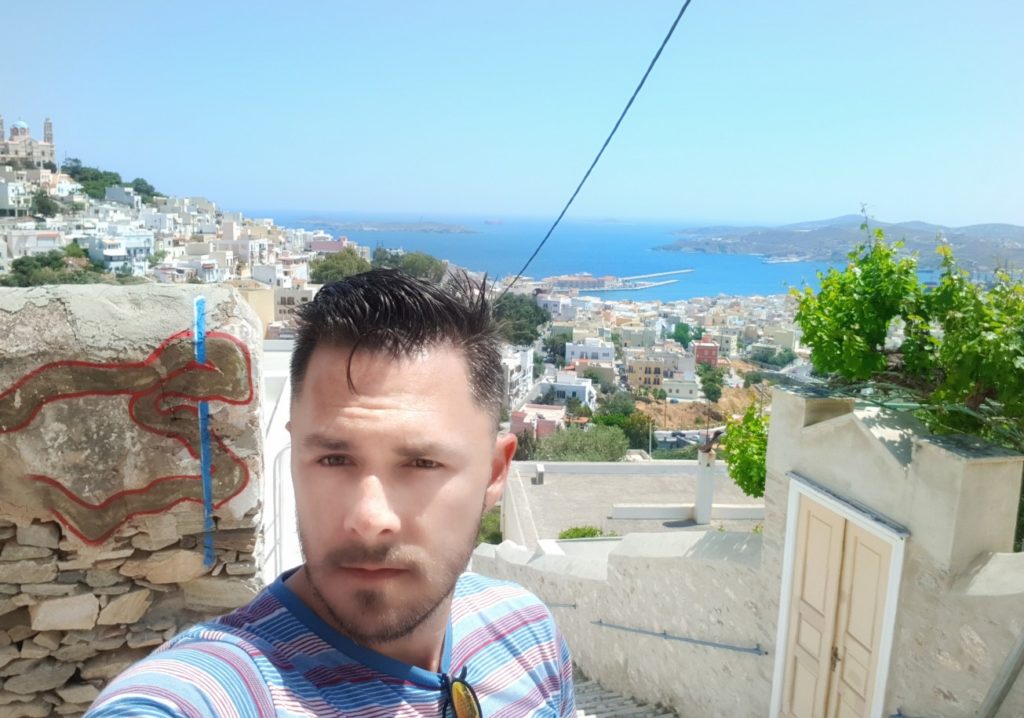 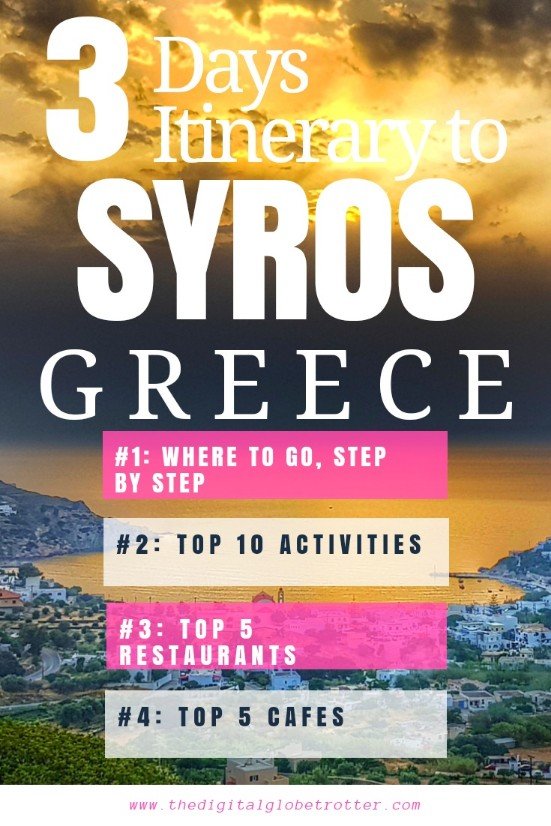 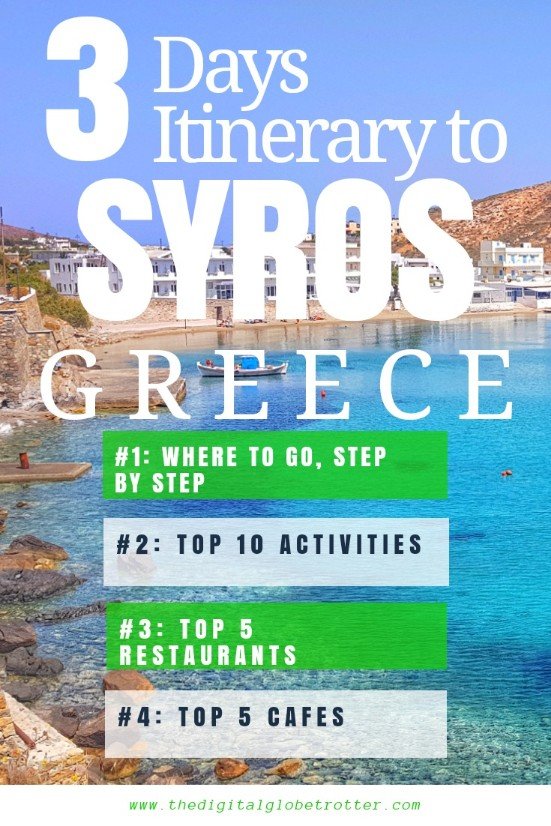 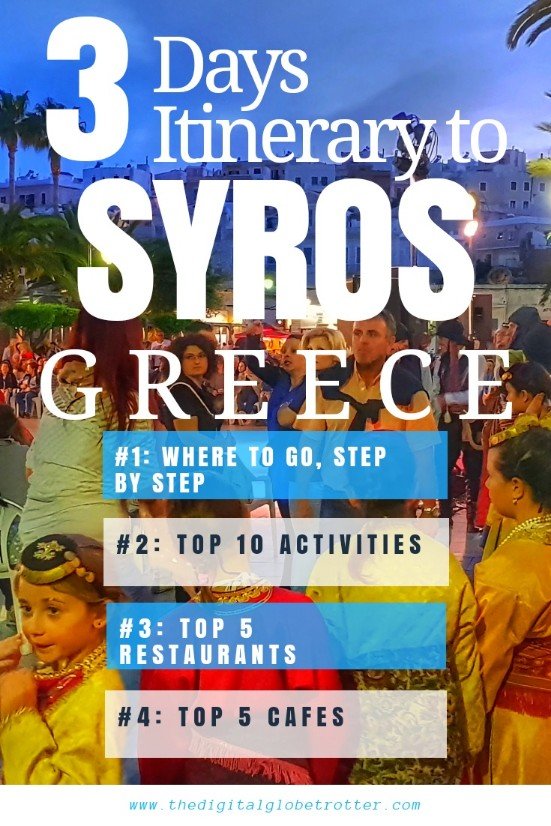