“You’re traveling to Syria in mid-2019… Are you Crazy???” would I mostly hear when mentioning my intention to explore the country while working on my plan to visit every country of the world… The truth is, there are many more countries which I have been that are in a similar situation but have not received as much media coverage as Syria. Pretty much everybody even from a young age knows that terrible things that happened over there, and even at the time of writing, are still happening as the war is still ongoing. My researches prior to travel had given me enough assurance that I felt it was finally possible to go with enough guarantee of a secure experience with less risk. Overall it was a 5 day expedition from A-Wadi, Homs, Aleppo and Damascus. Being one of the first tourists in Syria since 2011, this was a bet I was willing to take…

Why travel to Syria?

What is the interest of traveling to a country like Syria”, you may ask? Simply because this country is one of the most ancient countries in the world and holds some of the most precious treasures of humanity! And as an adventurer and historian like me, this is like being in a candy shop! Syria is precious for humanity, as this is where we pretty much all emerged as a specie once we emigrated out of Africa. From over 12000 years ago during the Neolithic period all the way to today, passing by the Arameans, Phoenicians, Romains, Achaemenid, Romans, the Crusaders, etc… pretty much everywhere you dig a hole in Syria you have a great chance to find remnants of one of the civilisations. Literally, all these civilisations have built on top of each other, making Syria one of the Richest piece for humanity. Syria makes European countries feel new, and American countries like my home country of Canada feel like newborn babies! This is why the destructions of the old city of Aleppo with its 8000 years of non-stop inhabitants, as well as the damage made to Palmyra, just to name 2, are such tragedies…

Pin it for Later 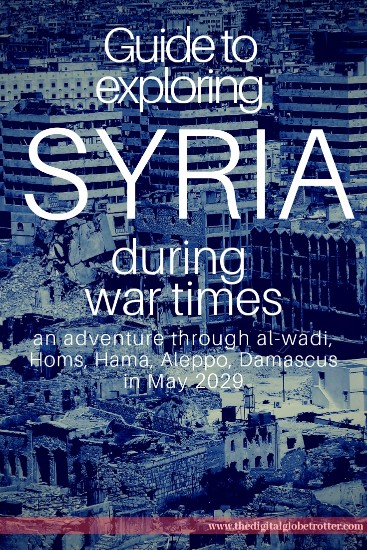 How about the ethics of coming to Syria while there is so much suffering in the country…? Trust me, they need us to come back. And as a world traveler and travel blogger, it is also my duty to show the world what is happening in every corner of the world without exception. Syrians have been through 8 years of very tough times and struggling in the middle of a proxy war between the most powerful nations in the world, including the United States, Russia, the Gulf Nations, Iran, Turkey, etc… Syrians have had enough of the war and as it is coming to an end, people are happy that they can finally look forward to living life again in a “normal way”, away from bullets flying all over the place and mortar exploding every now and then. 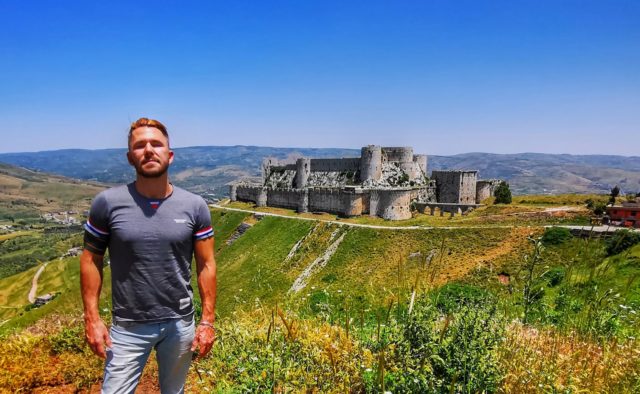 With Krak des Chevaliers in the Background

I have witnessed so much gratitude from everyone in Syria when saying I was a Canadian who came to “visit them and their country”, from the very first moment I entered the country at the customs at the border, to the kids in the streets of Aleppo. Even the hundreds of soldiers of the Assad Regime I have crossed on the over 100 checkpoints while travelling around the country have all been so friendly and welcoming without exception, even though my home country of Canada did not help them much in their struggle apart from receiving a few refugees. For them, I represented Hope of a normal life coming back to them again after 8 years of war, the hope of seeing tourist flow the country once again in masses to admire the beauties of one of the most historically rich countries of the world! I provided them with a souvenir of what pre-war life was like, which they will, hopefully, see come again to them in a very near future. So on the ethics of coming to Syria in 2019, my answer is: If you are willing to take the risk, Absolutely YES it is ethical and one of the best thing you can do to help them get past these horrible times! 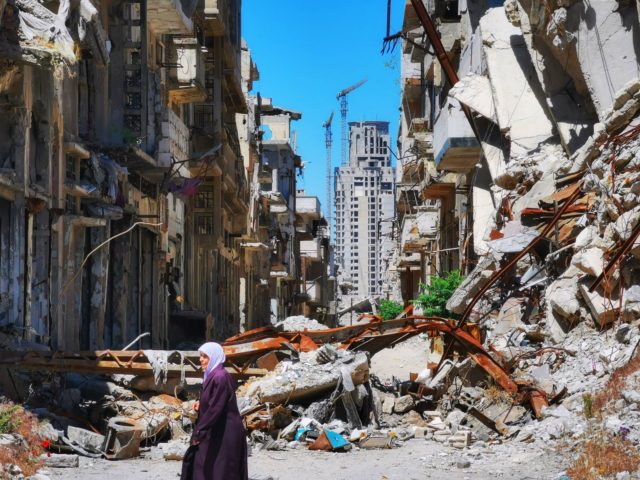 How did I come to Syria?

The Government has started issuing tourist visas again as early as the end of 2018. After investigating the few agencies that could help me get the Visa and take me around, I decided to finally prepare myself for a trip and at the same time visit my 191st country of 196, on my quest to discover every county of the world. The only option at the moment is to get a travel agency to organize a tour around the country with a government approved driver and guide and facilitate Visa applications and permission documents. All trips usually start in Beirut in Lebanon or can also be started from the few flights that go to the Capital, Damascus. My tour included a government accredited and highly knowledgeable guide and a driver who would bring me for 5 days all over the country. My guide, Ghassan, ended up being more of a friend and travel partner than a regular guide, and thanks to him, he made my experience unforgettable. If ever you go to Syria, I cannot recommend enough Ghassan for his knowledge and especially his trustworthy and human factor. 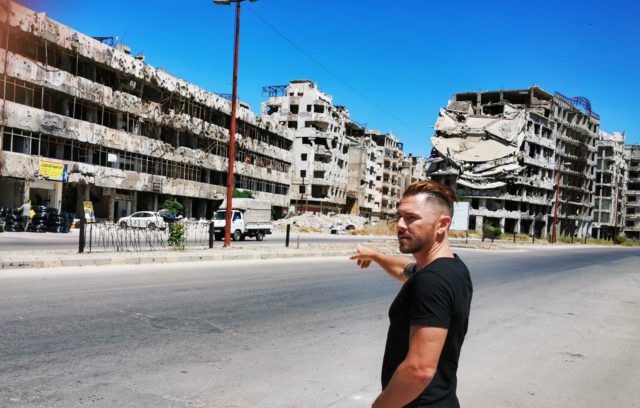 Assesing the Damage in Homs

Just ask me for his coordinates if you wish to travel to Syria yourself with somebody I fully trust. The same cannot be said about most travel agencies out there which have a bad reputation for cheating their customers as it has been reported with other travellers (avoid at any cost one called Basel), with hidden fees, straight up changing the agreements and double charging travelers. Be very careful in dealing with them, make sure you have a written agreement and reconfirm details twice or 3 times as every opportunity will be taken to extract more money from you. This is the sad part, but as of now, going with a travel agency is the only way. Ghassan could help you organize a tour. I have had many guides over my 191 countries visited, and Ghassan pretty much ranks 1st, no doubt about it (thanks again Ghassan if you are reading this, we will meet again next time I come to Syria, I promise). 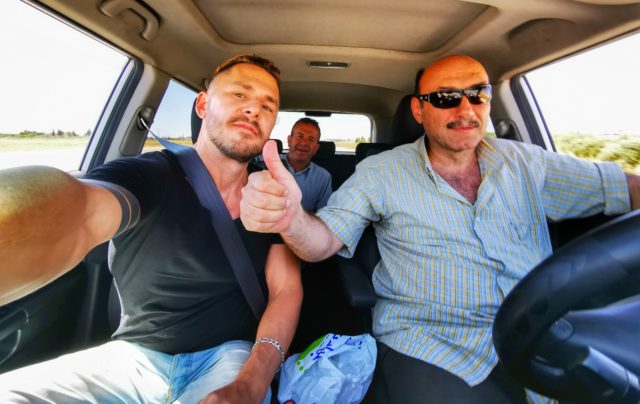 The Crew – My Driver Mohammed (right), and guide Ghassan (middle)

Together with Ghassan and Mohamen the driver, we went to areas which are part of the typical trip to Syrian back in 2011, and then we continued to other delicate areas they had not been yet since the war started… Even for them, visiting the damage that had been done to the Old city of Aleppo was deranging, where they discovered for the first time what the war has left of this city. I could feel the emotion in Ghassan’s voice as we were getting lost through the rubble, not being able to recognize some areas in what was previously main tourists streets which they had been bringing tourists for 20 years prior to 2011.

My Conclusions on Coming to Syria during War Times…

Should you travel to Syria??? My answer is Definitely Yes! I actually lost my chance to come in 2010 when I had initially planned to come and had to wait 9 years to be able to finally do it. With the current tensions in the world and especially between Iran and the United States (as of May 2019), I thought it was my chance to finally come as things are definitely better now, knowing that in this region of the world, things can degenerate fairly quickly. It was my opportunity, a risky opportunity, but I took it. If nothing else happens in the region in the future, I would highly recommend you also take your chance and visit Syria as this is one of the most incredible experience I have lived in any country, with friendly and welcoming people who will make sure you are safe and who will treat you like kings and queens. As I previously mentioned, Syrians deserve to come back to a normal life with no bombings, no bullets and a peaceful atmosphere. And the return of tourism will only help them turn the page and finally look towards brighter days!

I have prepared a detailed review of my itinerary through my 5 days adventure in Syria in May 2019. If you are interested in doing a similar adventure, I highly recommend this route as it covers the most interesting sites. 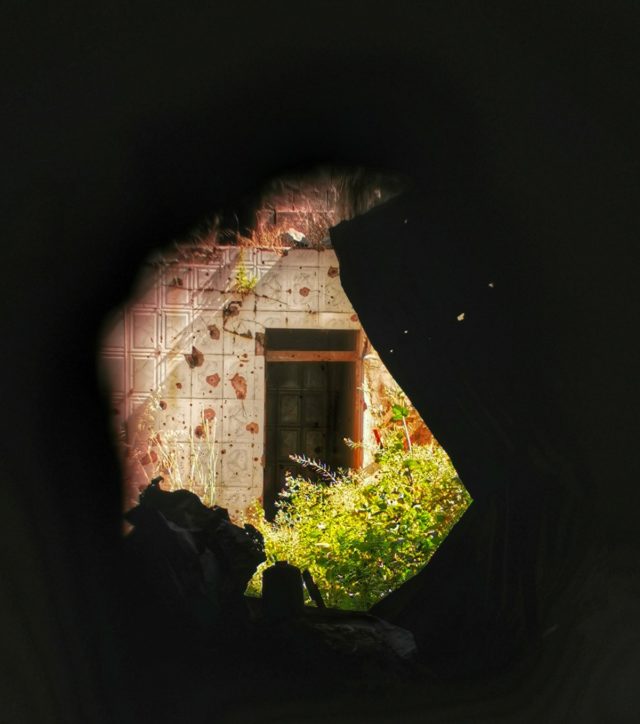 Damage done inside a Home, taken through a Bullet Hole in the Old Souk of Aleppo 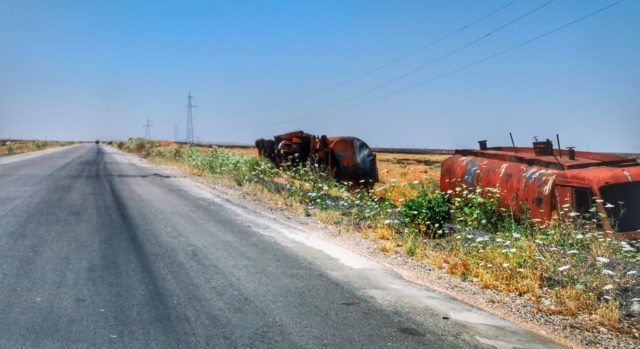 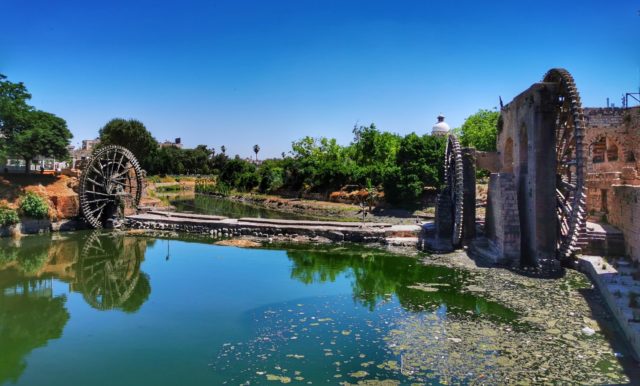 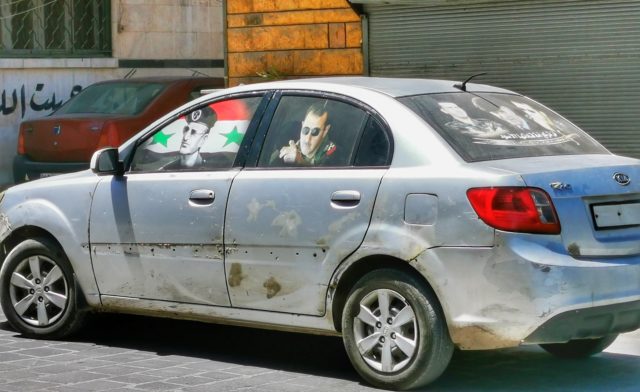 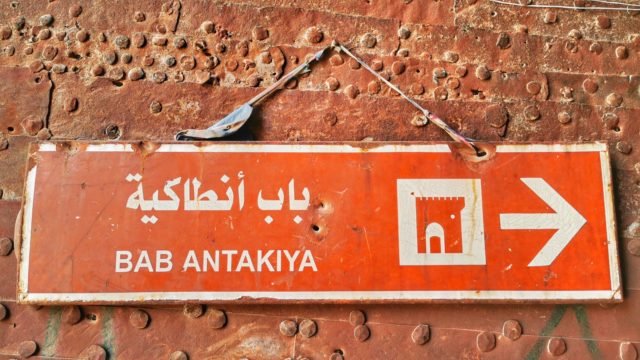 Sign to the Gate of the Old City of Aleppo, With a Bullet hole 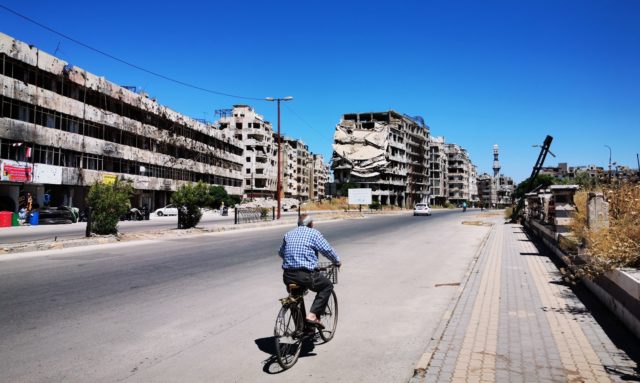 Old Man on a Bike in the City of Homs 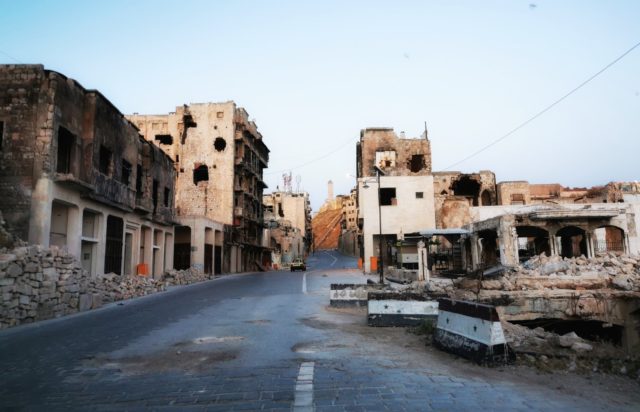 Destruction in the Center of Aleppo, with the Citadel in the back 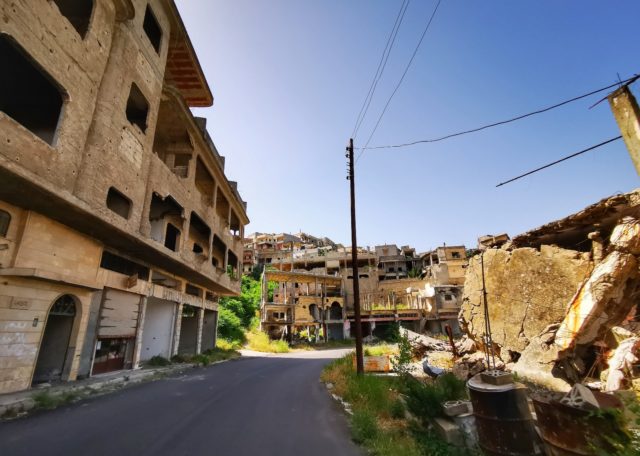 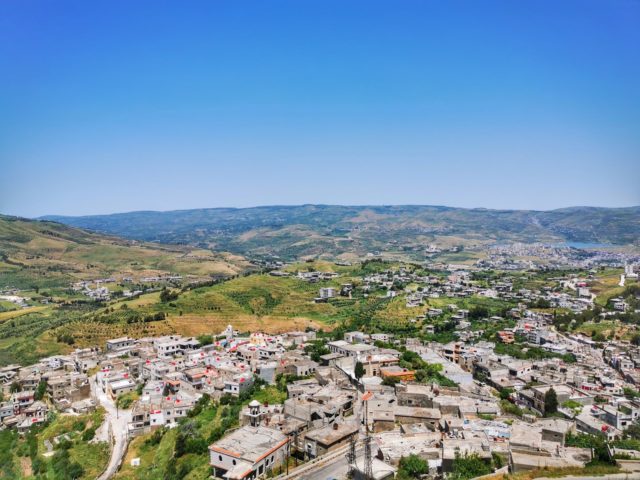 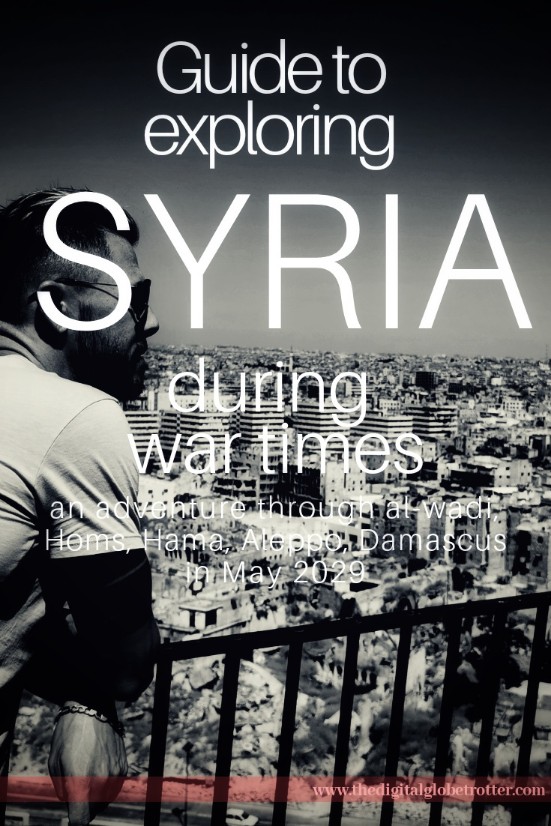